Automotive moves up the industry league table for customer service 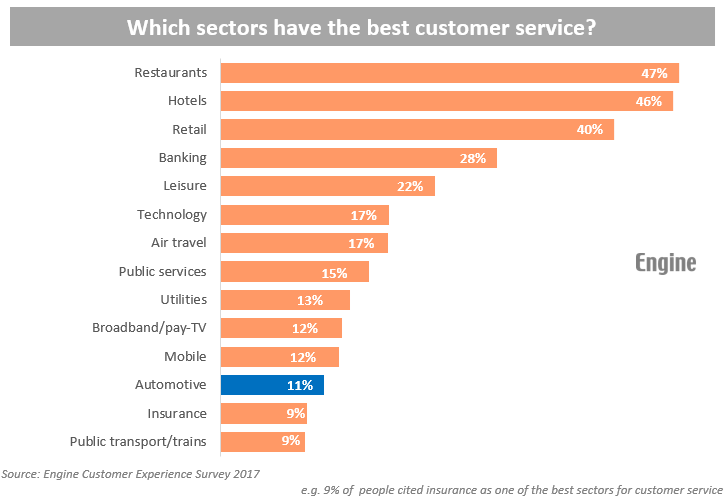 The automotive industry has jumped two places from its previous position at the bottom of an industry league table for customer service.

The survey results, by Engine a service design consultancy, show automotive has moved from 14th place to 12th, above public transport/trains and the insurance industry.

The total sample size was 1,025 adults and was conducted online during between June 1-2 this year.

The restaurant, hotel and retail industries took the top three positions. However, when it comes to the best individual companies for service, retail dominates with Amazon leading the way followed by John Lewis, M&S, Tesco and Sainsbury’s.

Joe Heapy, co-founder of Engine, said: “Car retailers still have much to do in improving customer satisfaction but they’re heading in the right direction.

“It’s crucial they do so in order to save the future of the dealership, which is becoming less relevant in car purchasing due to the amount of product information online, alternative routes to test drives and direct sales disruptors like CarWow.”

Heapy said manufacturers also needed to work harder to provide customer-centred experiences around buying and owning a car. He cited retail stores by DS, Infiniti and Tesla, and the switch to product geniuses and angels in showrooms as positive examples.

Heapy said: “The leading sectors and companies in customer service don’t think of it as an add-on at the front line, they put as much effort into designing the customer experience as they do their actual products.”