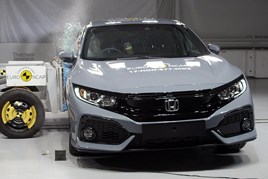 Euro NCAP hailed the standard installation of autonomous emergency braking as it recorded five-star safety ratings for all eight vehicles in its latest batch of tests.

A re-test of the Honda Civic – which had previously fallen foul of a fault with its curtain airbags – and test debuts for the DS 7 Crossback, Jaguar E-Pace, BMW X3, Porsche Cayenne, Mercedes-Benz X-Class, Subaru XV and Subaru Impreza all resulted in top scores.

Both the Civic and Impreza went beyond the standard fitment of autonomous braking systems with the added inclusion of lane keeping aids which will gently steer a drifting vehicle away from lane markings.

Commenting on the latest batch of results as a whole, Avery added: “This is a strong showing for the vehicle manufacturers who submitted cars for testing.

“It is encouraging that drivers of all eight cars will be supported by standard-fit AEB – a technology which is proven to reduce accidents.

“As two cars aimed at the family market, the Honda Civic and the Subaru Impreza’s suite of safety technologies are especially welcome.”

Mercedes-Benz’s new X-Class delivered class-leading results in Thatcham’s tests. The German brand’s debut in the pick-up sector matched the five stars achieved by the Ford Ranger in 2012 with a ‘Safety Assist’ score of 77% - the highest ever in the pick-up category.