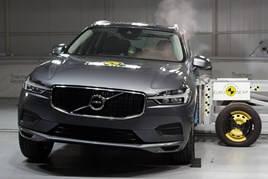 Volvo has proven the safety of its vehicles once again by “acing” Euro NCAP tests to score five stars with its new XC60 SUV.

In a competitive round of testing which saw Euro NCAP five-star ratings awarded to all nine vehicles most recently tested by Thatcham Research, Volvo set the standard in car safety.

Matthew Avery, director of research at Thatcham Research, said: “It’s exceedingly rare for a vehicle to score so favourably across the board.

“The adult occupant protection result for the Volvo XC60 is one of the best on record. But it’s in active safety that Volvo is really maintaining its lead.”

The new Volkswagen Polo was also tested in October, offering a late challenge to the Seat Ibiza, Thatcham Research’s supermini safety choice of 2017 so far.

Other vehicles tested during the month were all SUVs, continuing the trend for strong safety performers in the category. The Citroën C3 Aircross, Vauxhall Crossland X, VW T-Roc, Skoda Karoq and Mitsubishi Eclipse Cross all achieved Euro NCAP 5 star ratings.

However, the Citroën C3 Aircross and Vauxhall Crossland do not come with the standard-fit AEB systems which were common among all other test subjects, including the diminutive Polo.

The XC60’s Safety Assist score of 95% is 40% above the average for cars tested this year, with its Autonomous Emergency Braking (AEB) system scoring maximum points when tested at highway speeds, as well as successfully avoiding collisions at all test speeds and in all scenarios.

Praising the high-scoring AEB systems fitted to the XC60, Avery said: “The XC60’s standard-fit safety technologies are excellent – or rather those that we were able to test, as its Turn Across Path and Run off Road systems are not yet a feature of the Euro NCAP programme.

“That’s how high the Volvo XC60 is above the bar set by Euro NCAP.”