Sales of diesel vehicles slumped by 30.6% during the month as a total of 163,541 vehicles were registered during another troubling month for retailers and the Society of Motor Manufacturers and Traders.

Overall, registrations have declined by 5% to the end of November, with 2,388,144 cars hitting British roads so far this year.

Petrol cars also saw a gain, though of a more modest 5%.

But Hawes said: “Diesel remains the right choice for many drivers, not least because of its fuel economy and lower CO2 emissions.

“The decision to tax the latest low emission diesels is a step backwards and will only discourage drivers from trading in their older, more polluting cars.

“Given fleet renewal is the fastest way to improve air quality, penalising the latest, cleanest diesels is counterproductive and will have detrimental environmental and economic consequences.” 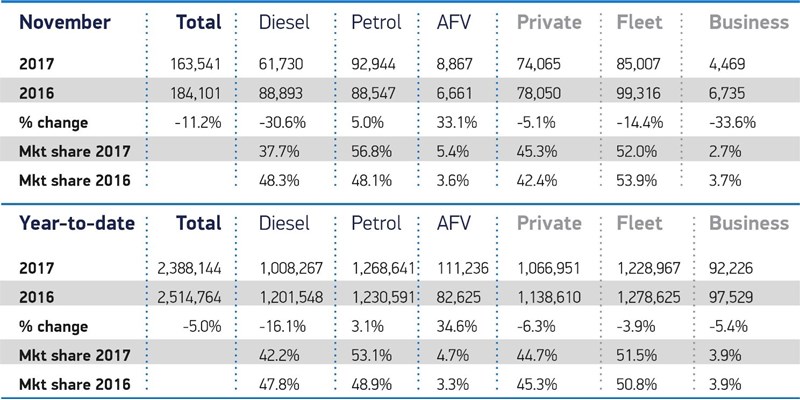 The SMMT reported that business, fleet and private registrations had all fallen back during November, with declines of 33.6%, 14.4% and 5.1% respectively.

Registrations fell across all body types except specialist sports, which grew 6.7%.

The biggest declines were seen in the executive and mini segments, however. The sectors decreased by 22.2% and 19.8% while demand in the supermini segment contracted by 15.4%.

Commenting on the latest registration figures, NFDA director Sue Robinson blamed confursion surrounding diesel-powered vehicles for the decline in sales during November, stating that diesel cars had shown a consistent decline “as a consequence of recent media coverage and government’s announcements”.

Robinson added: “The recently announced increase in tax on first registration of all new diesel cars affects the cleanest Euro 6, which in many cases still represent the most efficient and affordable vehicle.

“By failing to increase VED on older diesel cars, government is sending a confusing message to consumers that they should not buy a new diesel, but rather stay in their old cars or buy a second hand, dirtier diesel car.

“Positively, the resilience shown by the used car market continues to partially offset the decrease in new car registrations with many consumers considering second-hand cars as the most viable option for them.

“We expect the new car market to continue to perform in-line with these results in the last month of the year.” 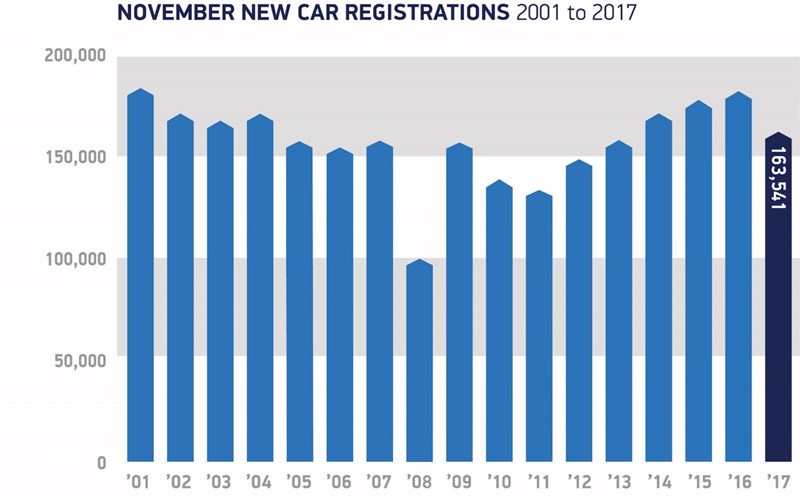 Richard Jones, managing director of Black Horse, acknowledged that many factors were at play in the declining market. He said: “These figures show the new car market continues a trend of moving to a more sustainable position. This further correction in sales will be beneficial for the market in the long term and runs counter to recent concerns of the influence of a potential oversupply of vehicles on used car values.

"There are a number of factors contributing to these numbers, not least the falling consumer and business confidence we saw in November, the adverse impact of exchange rates on UK car prices, along with the record levels of sales we’ve witnessed in recent times.

"We should expect to see the market continue to contract into the first half of 2018, and then level off. We also expect the used car market will continue to perform well as it has done through 2017.

"It’s also interesting to note a further fall in diesel sales, as newer diesel vehicles are the right choice of fuel for many drivers, particularly those driving larger vehicles or averaging long journey times. Whilst we continue to play our part in helping people buy electric vehicles, their current market development indicates an evolution rather than revolution.”

Chris Bosworth, director of strategy at Close Brothers Motor Finance, said that while dealers and manufacturers alike are starting to “feel the pressure”, the situation presented an “opportunity to increase competitiveness through innovation and flexibility”.

He said: “The Chancellor’s Autumn Budget highlighted the government’s support in developing the infrastructure for electric cars across the UK.

“Dealers should be given support to embrace changes in both consumer buying behaviour and government policy, and ensure they have the right cars on their forecourts.”

Auto Trader’s chief operating officer, Nathan Coe, added: “2017 has been a challenging year for the new car market, with Brexit continuing to cast a shadow over consumer confidence, exchange rates impacting the profitability of UK new car sales and the effect of the ongoing demonisation of diesel only serving to confuse consumers and hamper production plans for manufacturers.

"However, whilst the new car market is slowing, there remains great opportunity within the used car market.”