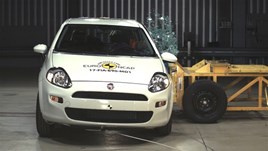 As safety test specialists at Thatcham Research, which carry out the authority’s new car safety testing, reflected on the heroes and villains of their results over the past 12 months a collection of cars put in a poor showing in the latest round of tests.

The Punto’s zero-star Euro NCAP rating comes after the re-release of the 2005 version of the hatchback.

It returned low scores for its crash performance, combined with the absence of key technologies such as Autonomous Emergency Braking (AEB) and Lane Support Systems - giving it an unprecedented 0% ‘Safety Assist’ result.

Matthew Avery, director of research at Thatcham Research, said: “In 2005 the FIAT Punto achieved a good rating. However, Euro NCAP frequently raises the bar in its testing regime and the FIAT Punto’s adult occupant protection score of 51% is more than 30% below the average for the Superminis tested in 2017.

“Yes this is essentially an old car, but that should have sharpened the focus on fitting safety technologies to counteract it’s dated crash performance.”

The final Euro NCAP test results of 2017 have shown that some carmakers are still choosing not to fit potentially life-saving technologies to new models.

In particular, Avery noted the contrast between two PSA Groupe products tested in recent months. He said: “This is a tale of two Citroens. In November, the DS 7 Crossback achieved a five-star Euro NCAP rating – and came with standard-fit AEB and Lane Departure Warnings. The DS is a premium brand, but Citroen has made a clear decision with the DS 3, offering AEB as an option only.

“Some great strides have been made in car safety this year: 72% of the cars tested achieved a five-star Euro NCAP rating, versus 56% in 2016. But December’s test results have shown that some carmakers are choosing not to fit potentially life-saving safety technology as standard, despite an overall trend to the contrary in 2017.”

The vehicles will compete for the hotly contested What Car? Safety Award 2018.

This year, vehicles must have standard-fit Lane Keep Assist systems, to help avoid some of the most dangerous collision types seen on UK roads.

All the top ten cars also have standard-fit Autonomous Emergency Braking systems, which operate at city and motorway speeds and can detect pedestrians.

“The top ten safest cars of the year all have standard-fit Lane Keep Assist systems,” confirmed Avery, who added: “With 6% of A-Road crashes involving head-on collisions, this should be the next life-saving technology fitted by carmakers who want to signal their intent to prioritise driver safety.”