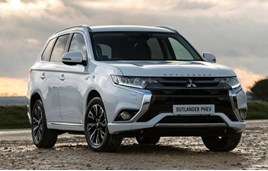 Birmingham has the highest number of ultra-low emission vehicles (ULEVs) according to Department for Transport (DfT) statistics analysed by click4reg.co.uk.

The local authorities in the UK, with the lowest number of registered, ultra-low emission vehicles were found to be Weymouth and Portland (53), Middlesbrough (46), Eden (46), Barrow-in-Furness (44) and West Somerset – with 40 licensed, ULEVs in Q4 2017.

Most of this increase is due to vehicles eligible for plug-in car and van grants.

New registrations in 2017 included 46,058 cars and 1,241 LGVs of models that were eligible for these grants, which was 89% of all ULEVs registered for the first time.

The most common models of ULEV registered for the first time in 2017 were the Mitsubishi Outlander with 7,408, followed by the BMW 3 Series with 5,871 and the Nissan Leaf with 5,665.

At the end of 2017, 64% of licensed ULEV cars were petrol hybrid and 35% were pure electric in the UK. The remaining 1% were diesel hybrid and other technologies.