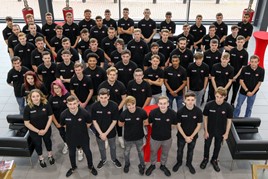 The number of people taking up Apprenticeships in January were 21% down on the same month in 2017, despite showing a 15% year-on-year increase at the start of 2019.

The result means that the take-up of apprenticeships remains significantly behind those prior to the introduction of the Apprenticeship Levy, which the Government announced in the 2015 Summer Budget as part of its drive to train three million new apprentices by 2020 and address the decreased focus on employee training outside the work place.

Steve Nash, chief executive of the Institute of the Motor Industry (IMI), said that January’s growth in apprenticeship starts over the same period last year was “welcome news”, but expressed conercen that the figures remained “significantly lower than those achieved before the Apprenticeship Levy was introduced”.

He said: “At the IMI we firmly believe that businesses need as much support as possible in order to understand how to they can best use the training funds to which they’re entitled.

“And we have been offering free expert advice to businesses in the automotive sector to help them understand how they can invest their Levy or co-investment, using this to enhance the skillset within their business.”

Skills and apprenticeships minister Anne Milton said that an “overhaul” oi fthe Apprenticeship Levy system a year ago was to credit for the rise in recent months and hailed the result as “excellent news”.

She added: “I’m delighted that thousands of employers large and small are now embracing the huge benefits apprenticeships are bringing to their business and offering people of all ages and backgrounds the chance to progress.”

Nash believes that more automotive sector businesses need to wake up to the benefits that apprentices can offer, however.

He said: “There is no question that apprentices deliver real value for businesses as a two year study undertaken by the IMI proved.

“The results found that apprentices typically generate an ROI between 150% and 300%, and usually generate profit within 12-24 months. Home grown apprentice-trained technicians invariably outperform market-recruited technicians, and this can reduce long-term recruitment and training costs.

“Employers must build apprentices’ knowledge, skills and behaviours based on targets they want them to achieve, and this will help them to see higher completion rates and a higher number of apprentices retained in their business.”