The SMMT has called on Government to bring an end to the threat of a ‘no deal’ Brexit to restore consumer confidence following a 3.4% decline in new car registrations during March.

Society of Motor Manufacturers and Traders (SMMT) chief executive, Mike Hawes, said that there was an “urgent need” to end the political and economic uncertainty and the potential for “additional friction that would increase costs and hence prices” in light of the disappointing ‘plate change month performance.

Demand fell in the private and business sectors during the crucial car sales month, with registrations down 2.8% and 44.8% respectively, while fleet demand rose by a marginal 0.3% as the market slumped to its worst March registrations tally since 2013. 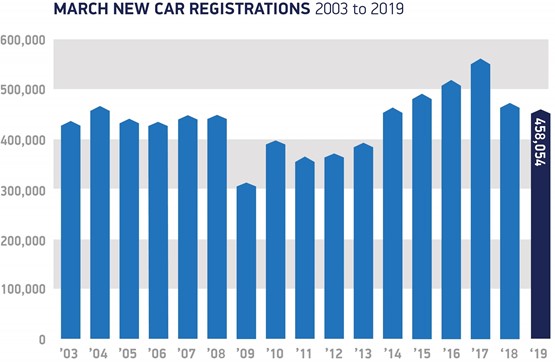 A total of 458,041 vehicles were registered in the UK last month, leaving the market down 2.4% YTD at the end of Q1, despite better weather on the forecourts than 2018, which was blighted by snowfall during the opening days of March.

She said: “Whilst there is demand for new cars, consumer decisions are being delayed due to Brexit. We call on the government to produce a deal with the EU that protects motor retailing, a crucial industry for the UK economy.”

Alison Ashley, head of automotive at RSM, suggested that March's registrations decline could be attributed to a softening of manufacturer push into the UK and a shortage of supply for petrol and alternative fuelled vehicles (AFV) to address a shift among consumers.

She said: "The drop in March registrations is not unexpected, due to Brexit uncertainty and the availability of the right stock. The shift in demand from diesel, to petrol, hybrid or electric vehicles has been acute; and in some cases, supply hasn’t kept up with demand, so dealers are struggling to deliver the right mix of products for customers.

"This is unlikely to change quickly, so consumers will have to continue to wait longer for new car deliveries until supply levels return to normal, so Q2 could be a particularly difficult quarter.

"This, combined with a drive to focus on other markets across the globe, could be why some brands are not setting targets to grow market share in the UK.

"It will be interesting to see if, and which, brands look to adopt a similar approach; and how this will impact registrations later in the year."

Weighing up the direct impact on individual car retail businesses, meanwhile, Karl Davis, managing director of Coachworks Consulting, said: “Car retailers needed a strong finish to Q1 after what had been a flat start to the year.

“The challenge dealers face now is how to trade profitably in Q2 with Brexit still unresolved, talk of a General Election and the continued fall in diesel demand.

“If the new car market continues to shrink this year, we will still see the dominant players take a bigger share through bold marketing, aggressive pricing and acquisitions.

The SMMT reported that new car registrations had followed the trend of recent months in relation to a decline in the volume of diesel vehicles leaving dealer forecourts.

The SMMT said that declines were seen across almost every vehicle segment, meanwhile, including popular Dual Purpose (down 1.8%) and small family cars (down 4%).

However, superminis saw a 4.3% increase in demand, taking a third (33.7%) of all registrations.

Hawes called for Government policies to support the automotive sector, not least on vehicle taxation and incentives, to “give buyers the confidence to invest in the new car that best meets their driving needs”, clearly indicating a need for a softening of policies perceived to be anti-diesel.

But he added: “Above all, we urgently need an end to the political and economic uncertainty by removing permanently the threat of a ‘no deal’ Brexit and agreeing a future relationship that avoids any additional friction that would increase costs and hence prices.”