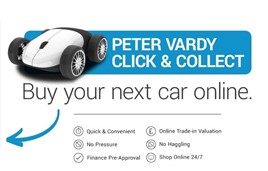 One in four Brits would be happy to buy their car online without taking a test drive, according to a recent study of UK consumers by AM100 dealer group Peter Vardy.

The research shows that online shopping is bigger than ever, with £1 in every £5.50 being spent on online purchases. Over a quarter of British consumers stated they would be purchase a car online, having never seen the vehicle or taken it for a test drive.

The data shows that seven in 10 consumers has bought a holiday online - often regarded as a household's third major purchase after the home and the car.

Peter Vardy’s digital marketing manager Claire Rogan said: “When it comes to deciding on a high value purchase such as a car, there are many factors that need to be considered before making the final purchase, ranging from negotiating part exchange rates to car finance options.

“This can now be done quickly and easily online, with no obligation and no risk of a potentially embarrassing situation of being rejected for finance or offered less than expected for their current car in front of a salesperson.”

Scotland is home to the most advanced online shoppers in the country, with 40% of those in Glasgow and 45% of those in Edinburgh stating they would happily purchase a car online without seeing it in person.

Rogan said: “With one in five cars predicted to be sold online within the next decade, and the research showing a growing trust in making high value purchases online, it is an exciting time for the industry and consumers alike.”

Customer Adam Waterhouse recently spent £30,000 on a new Audi, having never seen the car in question until he went to pick up the keys:

He said: “I decided to look online mainly due to price, as I was able to browse through a number of different options without having to worry about haggling.

“As soon as I’d made the decision on the car I wanted, I was able to contact the dealer directly and was in touch with them throughout the process via e-mail. As there was constant communication, I was never really worried about the purchase.”