The 10 car manufacturers offering the biggest discounts to buyers accounted for almost half of the UK’s registrations during the first half of 2019, according to What Car?.

In-market Target Price mystery shopper data from January to June, which was compiled from What Car?’s New Car Buying platform, found that the 10 brands with the biggest price reductions are beating a declining market – accounting for for 49.71% of the UK new car market.

Steve Huntingford, editor of What Car?, said: “When times are hard many manufacturers and retailers know that they have to appeal to increasingly canny buyers who are willing to negotiate to get a good deal.

“We are seeing manufacturers starting to offer significant discounts on new cars this year to battle a declining market.

“New car discounts have been growing steadily since January, with certain brands using them to maintain or improve their sales and market share.”

July registrations data published by the Society of Motor Manufacturers and Traders (SMMT) earlier this month showed that the UK new car market is down 3.41% year-to-date.

In a statement revealing the findings of its research, What Car? said: “Discounting was found to help other brands work against the declining market, too, with Mercedes-Benz and Volvo recording increased registrations – Volvo’s market share grew a particularly notable 27.05% in the first six months, with new product launches also contributing.”

New car registrations data from the SMMT shows the 10 brands with the smallest cash discounts accounted for just 12.35% of the year-to-date market share in June, although some of them still enjoyed growth.

Dacia buyers bought their new vehilces at an average 0.96% below list price, on average, What Car? said.

However, the brand saw a significant rise in its year-to-date market share, up 36.36%, suggesting its policy of low list prices is attracting a growing number of buyers. Other low discount brands with market share growth included Land Rover, MG and Toyota.

Commenting on the market trends, Huntingford said: “Interestingly, there is a clear split between premium brands; some are offering large discounts, including BMW and Mercedes-Benz, while others such as Land Rover and Lexus are pursuing a policy of lower offers.

“As a result, car buyers must do their research more carefully than ever in order to get the best car for their needs.” 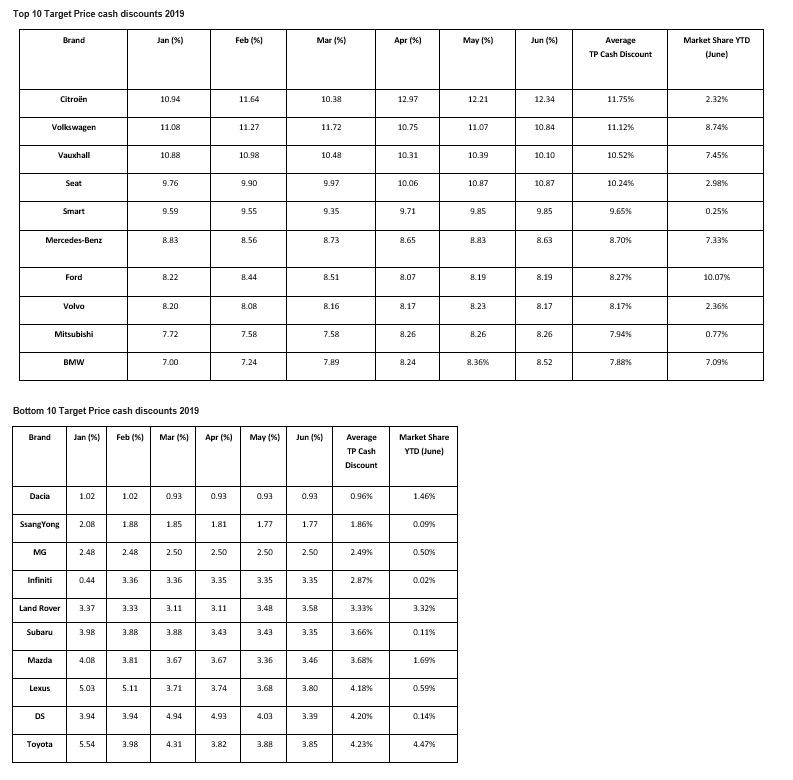