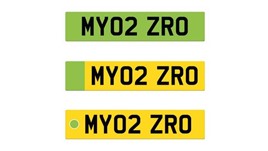 Consultation on the idea was launched today (October 22) in the hope that implimentation of the colourful new identifying 'plates could help their drivers benefit more easily from local incentives such as free or cheaper parking or priority access to limited-use lanes currently reserved for buses or car sharing.

Transport secretary Grant Shapps said: “The UK is in the driving seat of global efforts to tackle vehicle emissions and climate change and improve air quality, but we want to accelerate our progress.

“Green number plates are a really positive and exciting way to help everyone recognise the increasing number of electric vehicles on our roads.

“By increasing awareness of these vehicles and the benefits they bring to their drivers and our environment, we will turbo-charge the zero emission revolution.”

The Department for Transport (DfT) has hailed its plan for green number plates as another milestone for the Government’s Road to Zero Strategy, a £1.5 billion package of support which aims to make the UK the best place in the world to own an electric vehicle.

Since the strategy’s publication, the UK has seen record numbers of zero emission vehicles (EVs) registered and the Government has marked its intention to be the first G7 country to legislate for net zero emissions by 2050.

But automotive sector commentators are already questioning the proposed switch to number plates that clearly identify EVs to other road users, suggesting such a conspicuous market could foster resentment, while others have said that the cash used to fund the project would be better spend on further improvements to charging infrastructure.

The RAC’s head of roads policy, Nicholas Lyes, told the BBC: "While the sentiment seems right, there are question marks as to whether drivers would see this as a badge of honour or alternatively it could foster resentment among existing drivers of petrol and diesel vehicles.

"On the face of it, drivers we've questioned don't seem too impressed - only a fifth think it's a good idea and the majority said the number plates wouldn't have the effect of making them any more likely to switch to an electric vehicle."

Phil Lloyd, chief marketing officer at www.carwow.co.uk, was positive in his appraisal of the proposed green number plates’ roll-out. He said: “These new plans, if implemented in a way that benefits and incentivises drivers of electric vehicles, can only be positive when it comes to achieving the government’s 2050 target of net zero emissions.

“Not only will distinctive green number plates easily allow local authorities to spot people misusing parking spaces exclusively designed for electric cars, there has also been talk of easily identifiable green plates making it easier to either introduce EV specific driving lanes, or allow the cars to drive in bus lanes.”

However, suggesting that greater focus is still required to address the issue of EV charging infrastructure, Lloyd added: “Although there are now more EV charging points across the UK than petrol stations, the infrastructure we have in the UK is still in dire need of improvement.

“Motorists need to know charging points are accessible wherever they happen to be driving in the UK and further afield, and that they can charge their cars in the fastest possible time in order to appeal to the wider population with busy lifestyles.”