The latest car dealer profitability analysis from ASE has revealed that the average retailer experienced a £3,000 year-on-year increase in profits during September.

The growth recorded during the key numberplate change month comes in comparison to a 2018 results which in itself represented a £20,000 slump in profit, however, as dealers were impacted by reduced vehicle supplies as a result of the roll-out of WLTP vehicle emissions and fuel economy legislation. 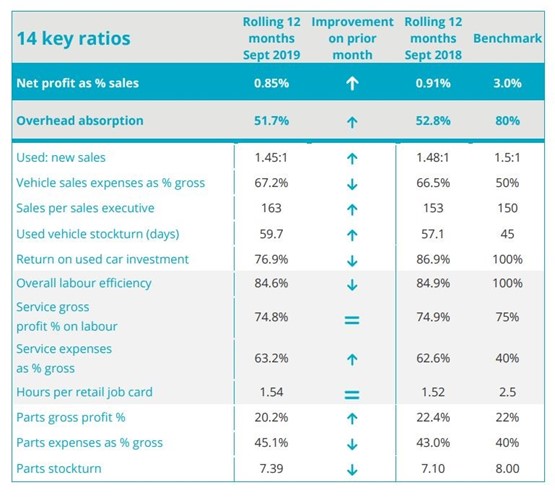 In his analysis of the data gathered from September 2019, Mike Jones, chairman of car retail profitability statistics specialist ASE, said that he had been “expecting an improvement in September profitability” but conceded that with the slight rise in overall registration levels recorded during the month, it was “not as big a bounce as expected”.

He added: “Overall retailer profits for the month rose by £3,000 on the result for the prior year, which was itself depressed as a result of WLTP related supply issues.”

Car retailers were seemingly unable to benefit from increased used car sales volumes during September as ASE recorded a used-t-new car sales ratio of 1.45:1, compared to 1.48:1 in 2018 and stockturn days increased from 57.1 to 59.1.

“This produced a fall in the return on investment on used cars and a lengthening of the average days in stock.

“Retailers need to increase the speed of stockturn to hedge against any potential falls in residual values.”

Jones said that, while it had recorded a slight fall in overall efficiency year-on-year, profitability has risen slightly as a result of the increased pool of technicians, adding that “maximising this profit area remains key to medium term profitability prospects”

Summing up with an outlook for what remains of 2019, Jones said that the outlook for the remainder of the year remains “challenging, albeit not disastrous”.

He said: “It looks like registration levels will fail to match the SMMT forecasts and used car and aftersales profitability will have to rise to fill the gap in the overall result.”