The UK has entered recession for the first time since 2009 after COVID-19 coronavirus lockdown measures contributed to a 20.4% contraction of the economy in the second quarter of 2020.

The Office for National Statistics (ONS) announced today (August 12) that the economy had bounced back in June as government restrictions on movement started to ease, but said that two consecutive quarters of economic decline had pushed the UK into its first ‘technical recession’.

The ONS said that its latest GDP estimates for June show that the UK economy is now 17.2% smaller than it was in February, before the full impact of the COVID-19 pandemic.

Car manufacturers' factory shutdowns also resulted in the slowest car production since 1954 during Q2 as new car registrations reported by the Society of Motor Manufacturers and Traders (SMMT) slumped by 48.5% in the first half of the year. 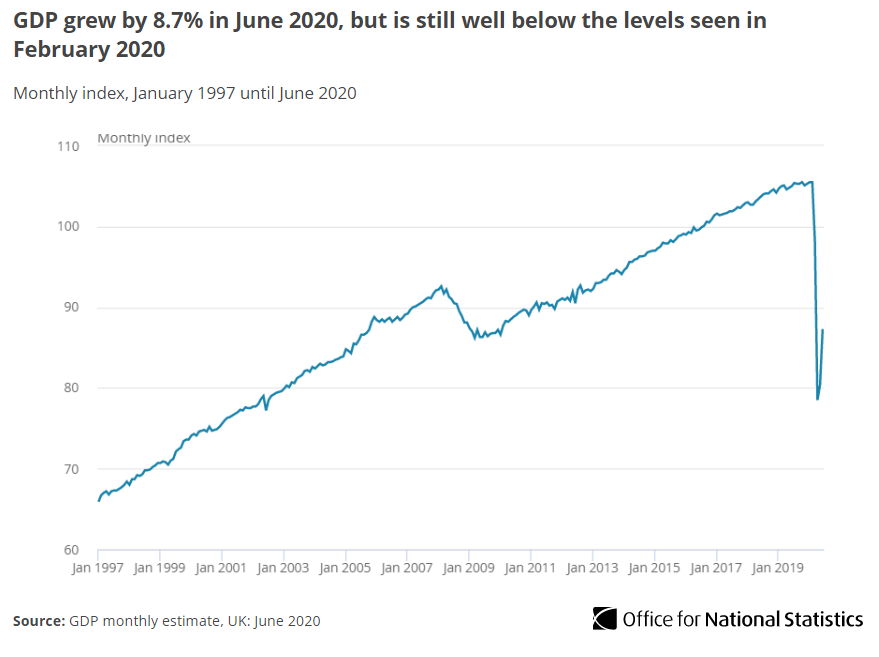 On a month-on-month basis, the economy grew by 8.7% in June, building on growth in May, however, raising hopes of what some industry commentators are referring to as a “Nike swoosh” recovery.

The SMMT reported earlier this month that the automotive retail sector had delivered an 11.3% increase in new car registrations during July – the first month to see car showrooms across the UK re-opened after lockdown.

Jonathan Athow, deputy national statistician for economic statistics, tempered news of the recovery in light of the UK economy’s biggest slump on record, however.

He said: "Despite this, gross domestic product (GDP) in June still remains a sixth below its level in February, before the virus struck."

Official jobs figures showed the number of people in work fell by 220,000 between April and June.

The BBC reported that the drop in the number of people employed was the largest quarterly decrease since May to July 2009, the depths of the financial crisis.

“Hundreds of thousands of people have already lost their jobs, and sadly in the coming months many more will,” he said.

Last week Pendragon chief executive, Bill Berman, told AM that a ‘false economy’, which has seen the UK’s car retail sector deliver on pent-up demand from the COVID-19 lockdown, is masking the true extent of impending redundancies in the sector.

Speaking to AM following Pendragon’s announcement that it is making 1,800 redundancies and closing 15 retail sites as part of a restructure of its operations, Berman said that “things are going to look very different” by the end of 2020.

“We’re living in a false economy to some extent,” said Berman. “The sheer amount of redundancies that are going to happen just haven’t hit the market yet.

“The Government furlough scheme has been a great help and the recovery of the sector post-lockdown has been phenomenal, but after you get through October and all these redundancies hit things are going to look very different.”

Commenting on today's news that the UK had slipped into recession, Steve Nash, the chief executive of the Institute of the Motor Industry (IMI), said: "It is of course disappointing – but not really surprising – that the UK economy is in recession.

"However, whilst there are tough decisions being made by businesses in all sectors, in automotive we are also seeing a ‘keep calm and carry on’ attitude.

"As of the end of July, 97% of automotive businesses were trading, with around 72,000 jobs returned to work from furlough in the second half of July and an additional 49,000 planned to have returned by the second week of August.

"The fact is our sector plays a crucial role in the underlying infrastructure of the UK economy.

"The key now is for automotive employers large and small to ensure they can keep one eye on the future – including preparing for the road to zero – whilst maintaining business for the here and now.”