Motorists in the UK are aiming to budget for a £20,000 list price before making the switch to an electric vehicle, according to research conducted by Deloitte – highlighting an affordability void.

Deloitte’s latest Global Automotive Consumer Survey found that 42% of car buyers were aiming to spend the sum, which significantly undercuts the average price currently paid for a new vehicle with an internal combustion engine (ICE).

The survey – which polled 1,500 people – did seek to highlight the finance options that make EVs affordable.

However, it also showed that 27% of drivers aged 18-to-34 had requested a payment deferral on car financing in 2020, suggesting that younger drivers who may be seen as early adopters of new technology could have had purchasing decisions stalled by COVID-19.

A separate EV-focussed survey completed by fleet operator Tusker, however, suggests that traction is likely to be far greater among business users set to benefit from ongoing BIK tax incentives.

Jamie Hamilton, Deloitte’s head of electric vehicles, said: “The structure of most car financing products means that the lifecycle of a brand-new car entering the used car market is typically around three years.

“With many UK drivers poised to switch to electric but remaining cost conscious, it’s likely we’ll see the secondary market for EVs mature over the next few years to attract these consumers.”

Deloitte said that just one-in-10 of its survey respondents said that they were considering an EV as their next car.

It said that, while lower fuel costs ranked the highest decision-making factor for drivers wanting to move to electric, current upfront costs remain a sticking point.

Hamilton said: “Realising the longer-term financial benefits that electric vehicles can provide would certainly encourage more drivers to switch; many of whom could otherwise be deterred by upfront costs, overlooking the total cost over a vehicle’s lifetime.” 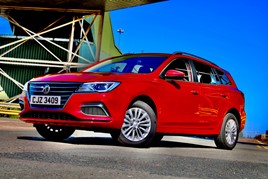 Nissan launched a new 0% APR finance offer on its Leaf EV this month, with a 15% deposit securing the hatchback for £249-per-month, meanwhile, with MG Motors’ new MG5 EV and the Vauxhall e-Corsa among the cars available for the same sum.

Hamilton said: “Electric vehicles are an increasingly viable option for consumers, many of whom are influenced by financial incentives as well as climate and emissions concerns.

“However, for EVs to integrate further into everyday life, greater accessibility to charging points is still required.

“Ensuring a joined-up approach and continued investment in the infrastructure is key to support growing demand.”

Data published by the Society of Motor Manufacturers and Traders (SMMT) last week showed that EVs grew their market share in the UK to 6.6% in 2020.

However, Deloitte’s survey found that consumer interest in petrol and diesel had crept up during the COVID-19 crisis, with 54% indicating they would prefer a traditional engine compared to 48% last year.

Hamilton said: “Uncertainty brought about by 2020’s pandemic has, understandably, seen some consumers revert to what they know.

“Whether this is a short-term, reactive change remains to be seen but the trend appears to be at the expense of hybrids, which have bridged the gap between combustion engines and fully electric to date.”

Tusker, which specialises in salary sacrifice schemes and operates a fleet of 20,000 cars, surveyed 1,752 UK employed adults who earn over £25,000 and drive to compile its EV survey.

It found that 63% would consider an EV for their next car.

Environmental benefits (58%), being able to charge their car at home (53%) and reduced tax on their salary or income (51%) were the main reasons for choosing an EV.

While 51% of survey respondents admitted to not choosing an EV because of the issue with a car’s range, although 79% confirmed they drive less than 150 miles a week.

“The signs are that knowledge is improving thanks to constant education from Tusker and the wider industry on how electric cars can fit into a driver’s daily life right down to the location of local charging stations.”

AM Poll
Are video appointments a better use of sales executives' time than face to face appointments? Please leave a comment.
Vote
View all
2368