A total of 2,167,504 vehicles changed hands between April and June amid strong demand as limited stock availability drove strong margins for retailers.

Limited stock availability resulted in the oldest profile of sold cars on record, with just 12.7% of vehicles sold being three years or under.

Hawes said that the strength of demand for used cars was “welcome news for the used car market”.

He added: “More motorists are turning to used cars as supply shortages continue to affect the new car market, and the increased need for personal mobility with people remaining wary of public transport as they return to work.” 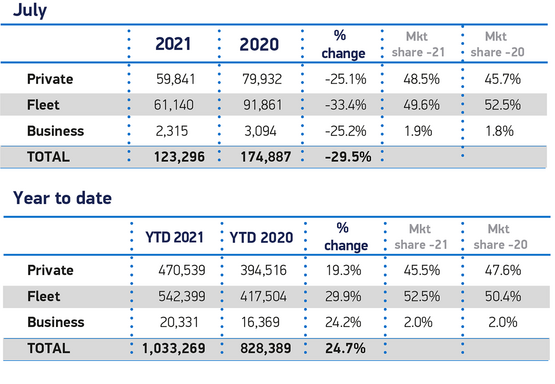 Following the market’s near standstill under COVID-19 lockdown conditions in April last year, the SMMT reported that the month had delivered H1’s largest growth, with sales rising 307.4% year-on-year to 724,743 transactions. The result was also up 5% on April 2019.

May and June delivered their strongest used car sales performance ever, meanwhile, with volumes up by 9.9% and 4.6% on 2019.

“We now need to see a similar rebound in new car sales to accelerate the fleet renewal necessary to deliver immediate and continuous improvements in air quality and carbon emissions.”

The SMMT conceded that the plug-in used car market was not yet seeing the acceleration of uptake anticipated, adding that the scale of the challenge to transition the entire used car parc away from traditional fuels “remains significant”.

Last week Auto Trader revealed that it had upgraded its used car sales forecast for 2021 to over eight million vehicles.

That move came incontrast to the stance of Cox Automotive, which downgraded its predictions in light of the sector's ongoing stocking constraints.

Responding to today's Q2 used car sales data from the SMMT Auto Trader commercial director Ian Plummer said: “Given the fact physical showrooms were closed for the first two weeks, for Q2 to reach record levels is a remarkable achievement. It is all the more impressive it’s only succeeded by Q3 2020, which benefited from a huge wave of positive sentiment following the first national lockdown.

"We predict circa eight million used cars will be sold this year, which is considerably more robust than those made by other commentators, but we believe more accurately reflect the exceptional health of the market."