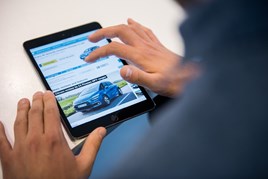 Car buyers have been faced with a 14.1% increase in the price of the average car advertised on Auto Trader during July.

The record increase demonstrates that car retailers across the UK are now reacting decisively to wholesale price rises triggered by an imbalance between supply and consumer demand.

According to Auto Trader’s latest Retail Price Index data the average price of a used car in July was £14,781 as advertised values rose for a 16th consecutive month on both a year-on-year (YoY) and like-for-like basis.

Auto Traders’ data showed that the rate of price growth has doubled in just three months, rising from a comparatively conservative 7.1% in April.

Richard Walker, Auto Trader’s director of data and insight, said: “For the rate of price growth to double in just three months is really quite incredible and is testament to the exceptional levels of consumer demand in the market.

“Based on what we’re seeing more broadly, such as the strong levels of disposable income and savings, as well as improving consumer confidence and low interest rates, we have every reason to believe that these levels have the potential to remain for much, if not all, of 2021.

“What’s more, we have barely begun to scratch the surface in reclaiming the 1.4 million ‘lost’ transactions in 2020 as a result of closed physical showrooms.

“It’s for these reasons we feel very comfortable in revising our forecast for this year at much higher rate than some commentators have suggested, to circa eight million used transactions.”

Last week Cox downgraded its used car sales forecast for 2021, by a further 0.6% to 6,766,250, as the lasting impact of COVID-19 and the global semiconductor shortage look set to result in a “market starved of supply" in Q3.

National Franchised Dealers Association (NFDA) chief executive, Sue Robinson, the used car sector’s market dynamics resulted in a positive outlook for retailers. She said: “Sustained consumer confidence across most vehicle types is greatly encouraging for franchised dealers as it is reflective of an increasingly healthy economy.

“Whilst we are seeing some headwinds in relation to new and used car supply, as a consequence of semi-conductor shortages and factory closures, NFDA members still remain cautiously optimistic in their outlook for the remainder of the year.”

Auto Trader’s confidence regarding consumer demand is based on 67.5 million cross platform visits during July.

The figure represents a 29% increase on the same period in 2019.

Consumers spent 10.2 million hours researching their next car on the marketplace – a 22% increase.

Fewer retailers are adjusting prices on fewer vehicles as they hold firm for a strong margin, meanwhile.

Auto Trader reported that an average of 2,116 retailers made daily price adjustments in July, which is 441 fewer than the same period in 2019.

Retailers were making significantly smaller reductions to sticker prices, averaging at just £97, compared to an average reduction of £339 in 2019. 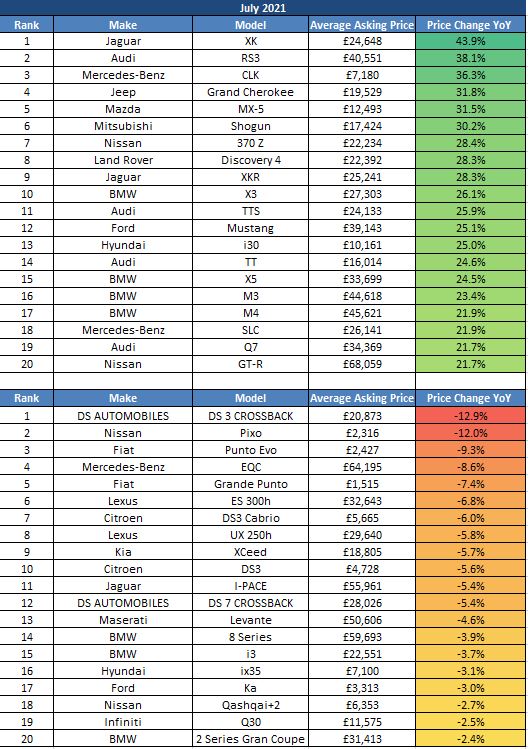 Consumers may be flocking to these sectors as the UK’s enforced shift to electric vehicles (EV) approaches and car manufacturers’ new car production focus shifts to electrified models.

Audi’s RS3, the Mazda MX-5 and the Jaguar XKR were all among the top 10 most appreciating cars in July.