Supply issues resulting from global semiconductor shortages and the ongoing impact of the UK’s COVID-19 ‘pingdemic’ have been blamed for the lowest July new car registrations total since 1998.

The Society of Motor Manufacturers and Traders (SMMT) said this morning (August 5) that just 123,296 new cars were registered as the UK automotive sector delivered its weakest July performance since before the millennium – down 22.3% on the month’s average over the past decade. 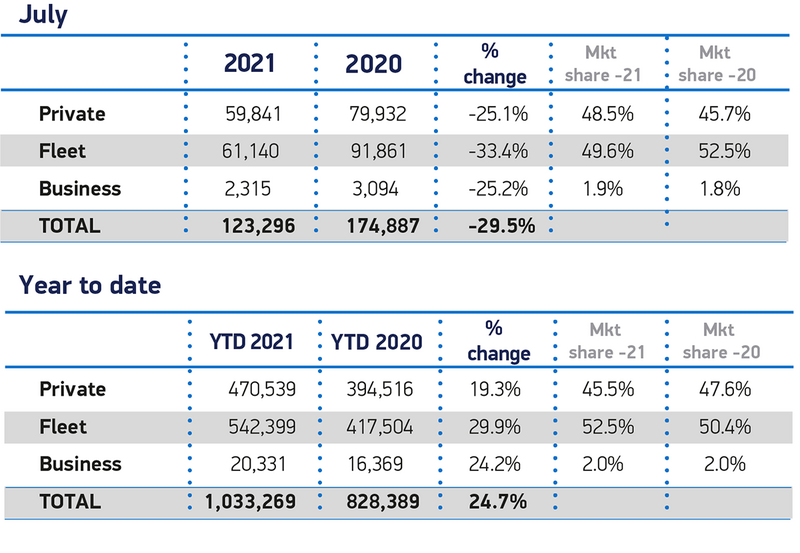 As SMMT once again revised down its annual outlook, to 1.82 million units – down from 1.86m predicted in April – in light of the 29.5% year-on-year decline, chief executive Mike Hawes said that shortages of semiconductors and staff were “throttling our ability to translate a strengthening economic outlook into a full recovery”.

Hawes added: “The next few weeks will see changes to self-isolation policies which will hopefully help those companies across the industry dealing with staff absences, but the semiconductor shortage is likely to remain an issue until at least the rest of the year.

“As a result, we have downgraded the market outlook slightly for 2021. The bright spot, however, remains the increasing demand for electrified vehicles as consumers respond in ever greater numbers to these new technologies, driven by increased product choice, fiscal and financial incentives and an enjoyable driving experience.”

Last month MPs in the UK Government’s Transport Committee said that car manufacturers should be compelled to increase their electric vehicle (EV) sales through the imposition of an EV “mandate”.

They said that the move could boost adoption as the UK moves towards its 2030 ban on the sale of new petrol and diesel vehicles.

But today’s SMMT data for July suggested that the threat of punitive EU fines for CAFE regulation breaches were already driving change. 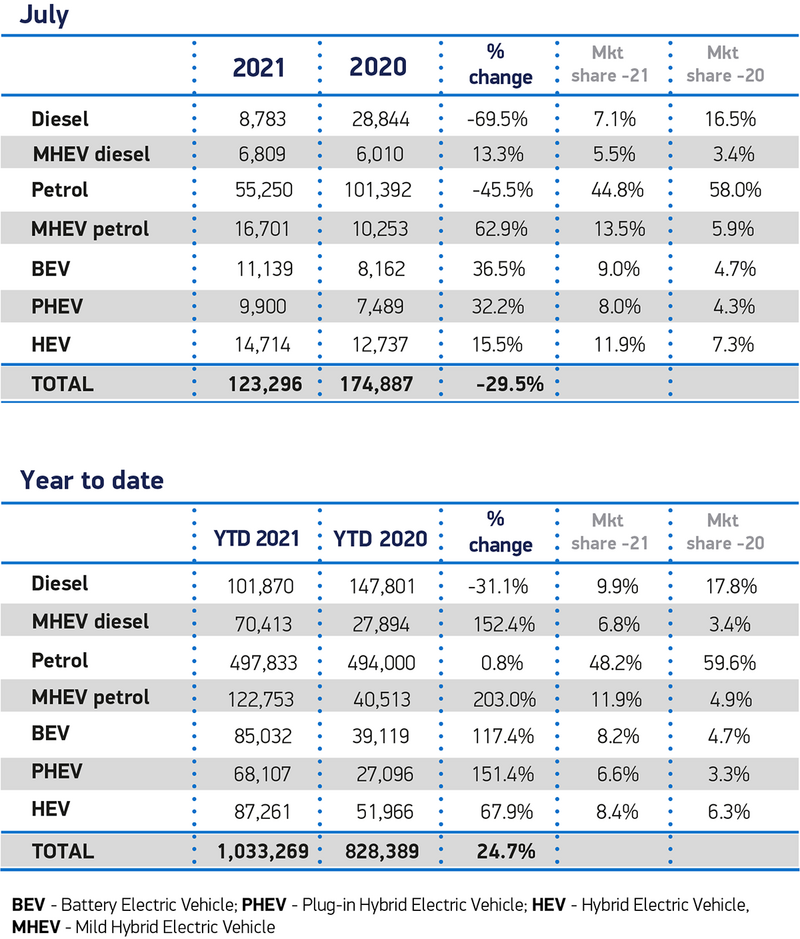 EVs are now expected to account for more than one-in-six new cars sales in 2021.

The SMMT’s data showed that July’s registrations decline was predominantly within large fleets which, at 61,140 units, were some 28.7% lower than the average recorded over the past decade.

National Franchised Dealers Association (NFDA) chief executive, Sue Robinson, said: “Given the headwind we are witnessing in relation to vehicle supply, as a consequence of semi-conductor shortages and factory closures, franchised dealers continue to perform resiliently.

“It is usual for consumer demand to wain slightly as we approach the important month of September. NFDA members still remain cautiously optimistic in their outlook for the remainder of the year.”

While supply issues continue to present knock-on stocking challenges for the used car market, car retailers who have been able to adapt and embrace the effects of appreciating stock have continued to deliver strong results.

Karen Hilton, heycar's chief commercial officer, said that buying habits may be aabout to change, however.

Commenting on today's registrations data, Hilton said: “As disruption to new car production looks likely to continue for the next 18 months, we’d expect car buyers to have more affordable choices as the average age of dealer stock increases due to this lack of new cars. This will be further compounded by fewer rental, fleet deals and pre-reg cars coming to market.

“As a result we’d expect a change in car buying habits, with more people keeping their cars for longer. Rather than changing every 18 months to two years, we would expect to see that growing to three years.”