Car retailers enjoyed a 27.5% year-on-year increase in profits during July as appreciating used car values boosted the sector, according to ASE.

The insight and consultancy’s monthly retailer profitability KPIs showed that retailers improved profitability by nearly £14,000 to £65,000 during the month as an imbalance between supply and demand set used car values soaring.

ASE said that the strong start to the second half of the year had pushed rolling 12-month average return on sales (RoS) up to 2.17% - a huge increase on the 0.37% achieved in the rolling 12 months to July 2020. 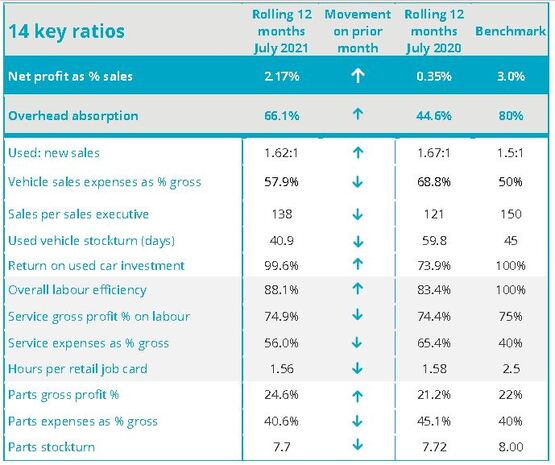 Mike Jones compiled the report. He said: “Phenomenally strong used car performance continued to be the principal driver behind the current strong profitability, with rolling 12 month return on investment now practically up to 100%.”

It added: “Stockturn is now below the benchmark of 45 days, reflecting the strength of current market demand.”

Earlier this week Cox Automotive’s insight and strategy director, Phillip Nothard, warned that car dealers across the UK will have to compromise on their usual stock demands in order to fill their forecourts in a sector now “starved of stock”.

But dealers at last night’s AM Awards event were positive about the market’s momentum.

One AM100 car retail boss said: “I can see the strong margins and supply of used cars continuing to the point where we’re able to benefit from an influx of new car stock into a market ready to benefit from plenty of pent-up demand in 2022. I think the outlook is really positive.”

As the automotive sector battled to cope with a “tsunami” of aftersales business in September – the result of the DVSA’s COVID-prompted MOT extensions in 2020 – ASE reported that July had also delivered improved trade for the sector’s workshops.

Overhead absorption continued to rise during July, Jones reported, with practically two thirds of the overhead costs of the business now covered by aftersales profits.

He added: “We continue to see managed overheads with strong aftersales profits, even despite the MOT holiday hangover from the prior year.”

While Government’s COVID-19 rates rebate started to taper off in July, ASE also reported that its data had indicated just a small increase in costs during the month.

But the report added: “Keeping costs down will be vital to protect the recent gains made in overhead absorption.”