The shift came as the used car sector experienced a 76th consecutive week of rising values last week and marks a jump on the previous all-time high of 11% recorded in August for vehicles aged up to 12-months-old.

Auto Trader said that 37% of nearly new cars are now priced within 5% of their brand-new counterparts, up from 28% in August and 13% at the start of the year.

The automotive marketing platform’s insight came as it published data which showed used car prices on its online platform had now risen four-fold in a year.

The figure is four times the 5.7% YoY growth experienced 5.7% YoY when physical forecourts reopened on April 12.

According to Auto Trader it took an average of just 23 days for stock to leave car retailer forecourts during the week, meanwhile, demonstrating the strength of consumer demand which has combined with supply shortages to fuel the price increases.

Auto Trader said that last week’s speed of sale was 17% faster than that recorded during the week of April 12.

Auto Trader’s data and insights director, Richard Walker, said: “With so much attention focussed on inflation right now, there’s huge interest amongst economists on those components that are recording substantial price rises, not least used cars which have been a notable driver of recent UK inflation rates.

“With levels of used car price growth once again smashing previous records, there is a lot of speculation around how long this boom could last.

“Whilst inflation in itself does pose a potential risk to consumer demand, we don’t expect to see price growth slow anytime soon.

“This is based on the continued acceleration we’re tracking across the market - fuelled, in part, by increased levels of household savings, a positive sentiment shift towards car ownership, and the 1.5 million ‘lost’ transactions last year – coupled with the ongoing shortage in both new and used car supply.”

Auto Trader said that a dramatic increase in consumer demand had been evidenced by more than 14.8 million cross platform visits to Auto Trader last week, which marked a massive 32% increase on the same week two years ago.

Reflecting the current strength of the market, Auto Trader continues to see fewer retailers adjusting prices on fewer vehicles and by smaller amounts. 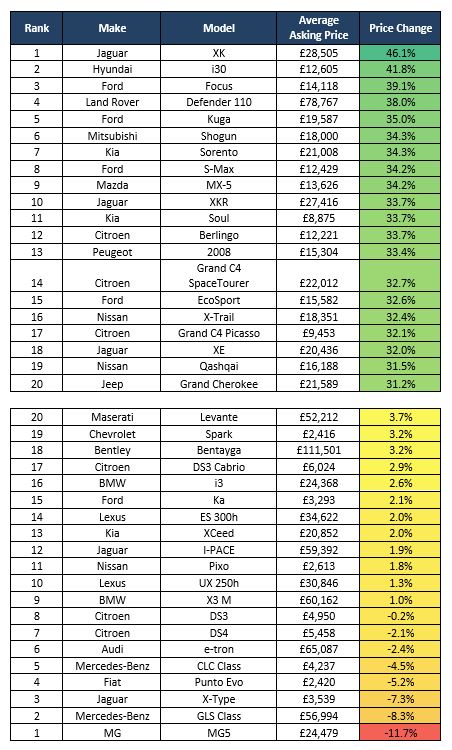