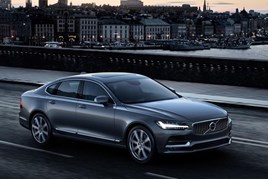 Volvo plans to take on the BMW 5 Series, Audi A6 and Mercedes E-Class from 2016 with its S90 executive saloon, which will be packed with technology and luxury.

The Swedish car brand has now revealed its S90 (click here for more pictures of it), which is due to enter UK Volvo dealerships around the middle of next year and which is hoped to boost the brand's sales here by 2,000 units annually. It will be followed by a V90 estate car, which will add further volume for the Volvo dealer network.

However Volvo Car UK managing director Nick Connor said S90's arrival is not about volume. "We can treat the S90 as a proper halo model. It can be a price-led segment but we won't play that game. We'll supply only what the market wants," he said.

Underpinning the S90 is Volvo’s Scalable Platform Architecture (SPA), first used on the latest XC90, and the saloon follows the seven-seat SUV by being sophisticated, the carmaker says, but also elegant, while the V90 will also be functional.

The Volvo S90 and V90 are expected to be offered with the same choice of powertrains as the XC90, with the UK market focusing on the 394bhp T8 ‘Twin Engine’ plug-in hybrid and the D4 and D5 diesel engines.

The S90’s cabin has cues taken from the XC90, with extensive use of natural materials and a layout again dominated by the upright infotainment screen, which incorporates satellite navigation and audio, along with controls for several of the car’s systems, including heating and ventilation.

The saloon also gets the SUV’s Pilot Assist semi-autonomous driving functionality, but adds a new 'large animal detection' feature to Volvo’s City Safety system to warn the driver of looming threats on the road.

In an interview earlier this year Connor told AM: “For a long time we built cars that we perceived were chasing the German premium competition. It wasn’t really what we should have been doing, and within the Ford umbrella and PAG there were constraints on what we could do so as not to compete with its other brands. Now no-one is telling us what we can and can’t build.

“We’ve a clear idea of what we want Volvo to stand for and we’re building cars that reflect that. We have a new-found confidence which is clearly demonstrated in the new products that come through.

“This is not design that’s aping anybody else. We’re not trying to out-handle a BMW, or to do things just for the sake of being better than the competition on one particular product aspect."