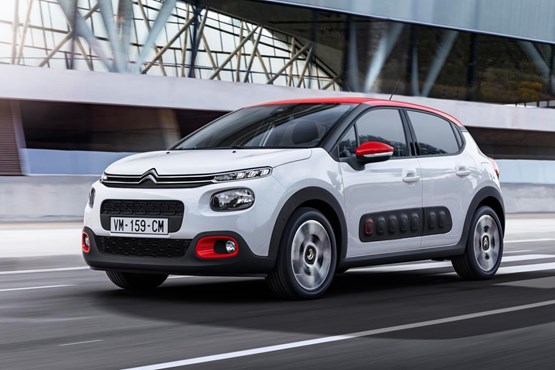 Citroen has revealed its new C3 as it prepares for a new assault on the B-segment with the Cactus-inspired supermini.

Vibrant colour schemes, personalisation and an array of new technologies for the French manufacturer will aim to build on the 3.6 million examples of the new C3’s predecessor.

The newcomer is the latest in a line of vehicles set to realise the 26 car and eight LCV “product offensive” announced as part of the PSA Group’s “Push to Pass” scheme in April.

Featuring the Citroen Cactus’ scratch resistant Airbump side panels, the crossover’s elevated daytime running lights and the option of nine body colours and three contrasting roof colours – complete with panoramic glass roof where specified – the new C3 is is bolder than its predecessor.

While 3cm lower than the outgoing C3, the 3.99m long, five-door new model is said to feature 2cm of extra shoulder room and a practical 300-litre boot.

Citroen chief executive, Linda Jackson, said; “The New C3 has all the Citroen values and all the qualities to give the brand new impetus, which is especially important as the previous model accounted for almost one in five sales in Europe.

“A comfortable car with real personality, it is set to appeal to new customers looking for a modern car with character.”

ConnectedCAM Citroën, debuts on the new model. An on-board HD camera that allows drivers to share their road-trip photos – or accident images – and videos directly with friends and family, the system is included alongside Apple CarPlay, Android Auto (available early 2017) and MirrorLink in a seven-inch touchscreen infotainment system.

Citroën Connect Nav ties in with connected services such as TomTom Traffic for real-time traffic information, geolocation and price details for service stations and carparks as well as weather forecasts and details of nearby accident blackspots.

Connected technologies included in the C3 will also help owners in the event of an incident, breakdown, or to offer eco driving advice.

The Citroën Connect Box with SOS and Assistance Pack will be available with three levels of assistance, including a tracker to locate the vehicle if it is stolen.

Three of the PSA Group’s PureTech petrol and two BlueHDi diesel engines are being offered from launch.