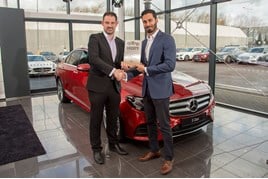 Voted for by a panel of 27 of the country’s most influential motoring journalists, the awards gave recognition to the premium saloon car which recorded over 12,000 registrations in 2016.

The new E-Class estate was launched in September 2016, while the E-Class Coupé is available to order now with first cars arriving from May 2017.

Krishan Bodhani, head of smart and product management, Mercedes-Benz Cars UK, said: “The E-Class is one of our core models; it’s at the very heart of our brand.

“When we unveiled the all-new car last year it showcased a host of innovative technology which makes it one of the most advanced cars in its segment.

“Together with its modern, comfortable cabin the E-Class presents a very desirable package – it’s great to see it getting the recognition it deserves.”

John Challen, director of the UK Car of the Year Awards, said: “Mercedes-Benz has a long history of creating impressive saloon cars and the new E-Class continues this trend, raising the bar in the executive vehicle sector.”