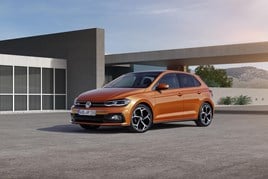 Volkswagen dealers have opened their order books for the sixth generation of the German brand’s Polo supermini.

Volkswagen has dropped the three-door Polo, which accounted for a small proportion of demand, but the five-door car is offered in seven different trim levels.

The carmaker claims new Polo has more cabin and luggage space (boot volume has risen from 280 litres to 351 litres), and assistance systems associated with larger cars, such as adaptive cruise control and blind spot assistance with rear traffic alert.

Every model has an 8in touchscreen, while active info display is an option.

A variety of the latest TSI (petrol) and TDI (turbo diesel) engines power the new Polo. All are Euro VI compliant and the petrol line-up will, later in 2018, include the use of the new 1.5 TSI EVO petrol (150 PS) with ACT Active Cylinder Technology to deliver two-cylinder deactivation for increased efficiency and reduced emissions.

The six three- and four-cylinder petrol engines range from the naturally aspirated 1.0 MPI with 65 PS to the turbocharged 2.0 TSI with 200 PS.

As a diesel the Polo will offer a choice of two 1.6 TDI engines whose outputs are 80 PS and 95 PS respectively.

Alison Jones, director of Volkswagen in the UK, said: “Our roomy new supermini is packed with new technology. Put simply, the new Polo is bigger and better than ever before.

“It now offers more space inside for passengers and luggage, more advanced technology thanks to the new MQB AO architecture, more safety, more comfort, more convenience and more style than any previous version.

“Efficient engines, a fine balance of ride and handling characteristics, and great refinement complete the mix and, in my view, make Polo the clear choice in the ever-competitive supermini sector.“