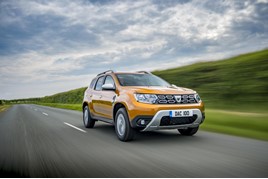 Dacia has introduced a new TCe 100 engine option to its Duster SUV range with a £10,995 list price for the entry-level offering.

The Renault-owned brand, which has seen a 33.6% rise in registrations year-to-date to the end of July according to data published by the Society of Motor Manufacturers and Traders (SMMT), claims that the new derivative offers reduced fuel consumption and a boost in performance.

Budget car buyers have flocked to the brand’s showrooms so far in 2019 as faltering consumer confidence helped to feed a 94.7% increase in sales of the Duster during the period.

The trend was predicted by former Dacia UK brand director, Louise O’Sullivan, who described Dacia as a “Brexit brand” in an interview with AM prior to her January promotion to the post of network operations director, Renault UK.

“I see us as being aligned to Aldi and Lidl and see Dacia very much as a Brexit brand,” she said.

“With the current uncertainty, people are maybe thinking that they should think more carefully about their next choice of car and we are well placed to take advantage of that.”

The newly-introduced Duster TCe 100 will aim to reinforce that position and help maintain the SUVs strong run of sales.

The Duster continues to be available with TCe 130 and 150 petrol engines as well as the Blue dCi 115 diesel engine.