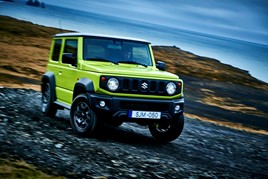 Suzuki GB has insisted that the Jimny 4x4 will remain on sale in the UK “in limited numbers” throughout 2020 in response to reports of the vehicle’s imminent withdrawal due to its high CO2 emissions.

The Japanese carmaker said that, following on from recent media speculation and reports of the future of the Jimny model in Europe, “Suzuki GB PLC would like to confirm that the model will remain on sale in the UK in very limited numbers throughout 2020”.

However, Auto Express is among news outlets that have suggested that the vehicle – launched back in 2018 – will be removed from sale in the UK “from some point in 2021”.

Suzuki GB’s statement said: “At launch in late 2018, Suzuki announced that the higher CO2 emissions levels of this model would adversely affect its whole range CO2 average in Europe after 2020.

“This target was set across its range of vehicles according to EC CAFE legislation.

“Suzuki GB PLC will make every effort to ensure delivery to its customers who have already placed an order.”

A total of 1,221 Jimny’s were sold in 2019, according to registrations data published by the Society of Motor Manufacturers and Traders (SMMT), as the brand saw its overall volumes decline by 9% to 38,519.

In this week’s statement on the immediate future of the Jimny, the brand said that further imminent developments in the Suzuki range to lower CO2 emissions and further improve fuel consumption include the introduction of 48V Self-charging Hybrid technology fitted as standard equipment to Swift Sport, Vitara and S-Cross models.

Suzuki launched 12V Hybrid technology, initially in its Ignis hatchback, in 2016 and this is now available as standard equipment across all Ignis models as well as all Swift models from the Spring of this year.

The two Japanese brands announced that they intended to further their plans to collaborate in new fields after resolving to pool their expertise to develop alternative fuel vehicles (AFV) and compact cars back on March 20, 2018.

Among the resulting product collaboration will be a Suzuki-badged, Corolla-based hybrid vehicle produced at Toyota’s Burnaston manufacturing plant, near Derby, from the end of 2020, the Derby Telegraph reported at the time.