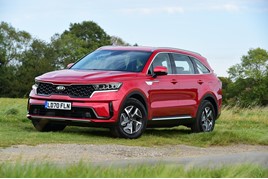 The Kia Sorento has been named the best car in Britain by Carbuyer, as part of its 2021 Best Car awards.

At the awards, the Kia Sorento was acknowledged by judges for its space, technology and value for money, which forms “a versatile SUV that's nipping at the heels of premium rivals”, said the judges.

Paul Philpott, president and CEO of Kia Motors UK, said: “For the Sorento to win this award is an outstanding achievement, and one which fills our UK team and dealer partners with pride and encouragement.

“This vehicle embodies just how far we have come as a brand since entering the UK market nearly 30 years ago, offering high quality, efficient and desirable products to a growing customer base. The Sorento winning this award is high praise indeed and credit that’s been duly earned.”

The awards presented in an online presentation (November 25) mark the 10th anniversary of Carbuyer.

To celebrate the milestone, Carbuyer also announced the Ford Fiesta as the winner of its Car of the Decade award.

Carbuyer’s judges concluded that over the last 10 years, no car has better represented the needs of the real car buyer, than that of the Ford Fiesta.

Lisa Brankin, managing director of Ford of Britain & Ireland, said: “To elevate the Ford Fiesta to Carbuyer’s car of the decade is an honour backed by car buyers. They have made Fiesta the UK’s top selling car every year since 2009. Today Fiesta’s mild hybrid engine and modem to connect with the Ford Pass app are serving 2020 customer needs.”

Richard Ingram, editor at Carbuyer, said: “This year has been the most challenging that we’ve faced, but we’re continually impressed that car manufacturers have continued to launch models that people really want to buy. The Kia Sorento is the perfect example; a car that offers the style, space and range of engines that means it is the undisputed king of the new-car market.

“For Carbuyer’s Car of the Decade, we looked for a single model that defined the automotive landscape – a car that does exactly what it says on the tin. The Ford Fiesta has been the UK’s best-selling car every year since Carbuyer launched and is a byword for British motoring. It’s a brilliant all-rounder and truly deserving of our coveted Car of the Decade trophy.”

Full list of winners at the Carbuyer Best Car Awards 2021:

Used Car of the Year, in association with BuyaCar
Vauxhall Astra