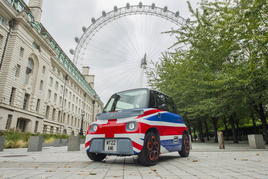 More than a thousand people have placed a deposit for Citroen’s new compact electric city car, the Ami, in less than two weeks after it was confirmed for the UK market.

Citroen began accepting £250 deposits for the car on September 22, following “significant interest” in the model that was initially billed for the French market.

More than 14,000 people have now registered their interest in the electric two-seater.

Pricing for the Ami has not yet been revealed, but it’s expected the car will be priced from around £6,000. In France, the car can be leased for as little as £18 per month. It was oringially designed to suit car sharing and subscription models.

Citroen is still finalising distribution plans for the UK, but AM was told that the Stellantis-owned brand was “thinking beyond the conventional routes and methods of going to market”. The spokesperson added: “Our retailer network will play an important role, for sure.”

Those still interested in joining the queue to secure their very own AMI are able to do so online with a £250 refundable reservation fee ahead of the launch in spring 2022.

Citroen is marketing the left-hand-drive set-up of the Ami as a positive for the city drivers who are at the core of its target audience.

The fully electric Ami has a 5.5kWh battery that recharges in three hours and provides a range of 46 miles. Officially recognised as a quadricycle, the Ami has a top speed of 28mph.