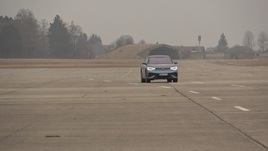 Euro NCAP has rated the assisted driving technology offered by the Nissan Qashqai and Volkswagen ID.5 as “very good” in a series of tests that also put the Polestar 2 and Jaguar I-Pace through their paces.

The latest round of Euro NCAP results feature assessment of ‘Level 2’ assisted driving systems with the aim of highlighting those which offer a good balance of performance across three key areas.

The level of assistance on offer, the feedback given to ensure the driver remains engaged and aware of their responsibilities and safety mechanisms function in the event of an emergency were all under scrutiny.

And while the Qashqai and ID.5 gained impressive ratings, the Polestar 2 was deemed “good” as a result of limitation to its systems as the Jaguar I-Pace achieved an “entry” level score due to its lack of more advanced features.

The Qashqai scored 74% for assistance competence and 93% for safety back-up, with its ProPilot system providing a good and balanced level of driver engagement and driving assistance and underpinning a ‘very good’ overall rating.

Euro NCAP said that the system demonstrated its ability to adapt to speed limit changes and road features that require a change of speed while its Autonomous Emergency Braking (AEB) system provided “an excellent level of emergency support”.

Avery said: “Nissan has proven that it is possible to deliver a high performing, well-balanced assisted driving experience at the more affordable end of the market, proving that as technology develops it becomes more accessible and ultimately ubiquitous.”

It scored full marks in assisting the driver in guiding the vehicle through motorway curves and for its steering interactivity when altering lane position and performed very well in all areas, especially in terms of speed adaptation when approaching roundabouts, junctions, and corners.

Elsewhere in the tests the Polestar 2’s Pilot Assist received a ‘good’ rating, in part due to improvements made via an Over-the-Air (OTA) update since the vehicle was rated in 2021.

OTA updates ensure that the consumer is always driving the safest version of the manufacturer’s car, Euro NCAP noted.

However, the system was deemed “limited in other areas” such as not being able to adapt speed for road features and its AEB system not responding as effectively to stationary cars.

The EV SUV was the only vehicle to feature in this round of testing that does not cease driving while the assisted driving mode is engaged if the driver becomes unresponsive.

“Instead, the vehicle simply withdraws steering support but maintains the Adaptive Cruise Control function, as opposed to guiding the vehicle to a controlled stop”, Euro NCAP noted.

Avery said: “Some of the vehicles have performed very well in this latest round of testing, and it’s especially positive to add two new ‘very good’ cars to the previous ratings.

“We would strongly encourage drivers to use this technology, it is more than just a feature count, it protects drivers and other road users alike with numerous safety benefits, with the best systems automatically adapting to speed limits and traffic, keeping drivers in lane, and protecting your blind spots.”