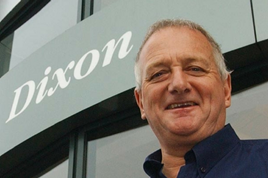 Dixon Motors founder Paul Dixon has died suddenly at the age of 72.

The Yorkshire-based businessman is understood to have been holidaying at his villa in the Algarve when he suffered a suspected heart attack last Monday.

Dixon (pictured) founded the Dixon Motors group back in 1973 and was central to its development in to a multi-franchise operation with 46 sites across the North of England.

In May 2002, the firm was sold in a deal worth about £109.7m, however, and five years later entered liquidation.

Dixon was responsible for transforming many derelict buildings when he became involved in property development following his departure from the motor trade, The Hull Daily Mail reported.

Most recently, Dixon had been a leading figure in the proposed £525m redevelopment of Loudoun Castle in Ayrshire.

Dixon joined the board of Loudoun Castle Projects Ltd on October 20, according to Companies House records, and was acting as principal lead on the proposed new home and leisure development on land surrounding the castle.

Dixon told the Daily Record that the project – which could support 2,500 jobs, including 1,000 construction jobs and an additional 1,500 jobs through the leisure and retail offering – was a “once in a lifetime opportunity”.

Paul Sewell, managing director of Hull-based construction company Sewell Group, told the newspaper that he had been inspired by Dixon, describing him as a "business icon".

Sewell said: "His intuitive feel was rare and singled him out as one of the great local business figures of a generation.”