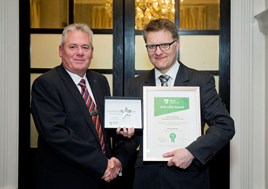 Vertu Motors’ chief executive Robert Forrester, who hosted the awards, called Ridell "a true advocate of both Vertu Motors and Honda", adding: "The team at Newcastle Honda see Neil as a source of professional advice and support and he provided great backing to his manager Sean throughout the course of 2016.

“Our Service Advisors have to ensure great customer service and outcomes. Neil has delivered a sterling performance this year and deserves this recognition, which is an integral part of our business.”

Riddell said: “I would also like to thank the hard work of the Vertu Honda Newcastle team as a whole.”

Malwina Bartosiak was named ‘accountant of the year’, whilst her colleague Graham Johnson was chosen as ‘parts manager of the year’.

Vertu Motors’ chief executive Robert Forrester said: “Malwina has had a terrific year that started with her taking on the challenging role of accountant at Bradford Renault and Nissan. She sets about her work with an energy, commitment and enthusiasm that has been maintained throughout the year.

“It has also been a personal journey for Malwina as this was a major step up from her previous role and she has risen to the challenge and developed her own skills and leadership techniques whilst also working away from home each week.”

“Graham has taken it upon himself to develop and grow the business, by working with his colleagues to fine tune their approach to customer service, while continuously looking to improve on processes.”

Johnson said: “There’s a culture within the dealership that everyone helps each other. It’s about working with your colleagues to make sure the business is a success across all levels. I’m pleased to have had my efforts rewarded but the dealership is only performing as well as it is because of a sustained effort by the whole team.”

Bartosiak said: “It’s an honour to have received this award. It’s been a challenging but satisfying year with a lot of hard work, so I’m ecstatic to receive recognition for my efforts.”