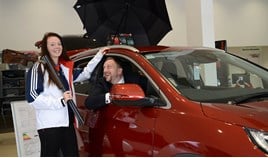 The 20 year-old has already been selected to take part in the GB Talent Programme and hopes to go on to represent England at the 2018 Commonwealth Games and Great Britain at the 2020 Olympic Games in Tokyo.

Vertu's support will allow Brown to focus on working with trainer Ian MacGregor, who has previously coached medal-winning Olympic and Commonwealth teams.

“Amy has already proved that she has what it takes to succeed, having previously won many international competitions.

“This support will allow her to focus on her training as she goes on to bigger and better things. We’ll certainly be watching her career with interest.”

Brown said: “I’m very grateful for the support of Vertu Honda Morpeth. Due to the lack of appropriate facilities close to home I spend a lot of time on the road, which can be very expensive.

“This support is a great help and means that I can focus all my attention and efforts on preparing for my competitions, and hopefully securing the greatest prize of all - representing Team GB at the Olympics.”