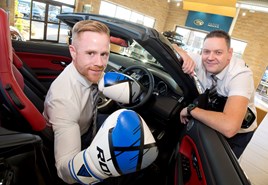 A fund-raising business manager at Gordon Lamb Chesterfield Land Rover swapped the forcourt for the boxing ring to raise more than £580 for Cancer Research UK.

Tom Iveson donned a pair of boxing gloves after signing up to compete in an Ultra White Collar Charity Boxing match and embarking on an eight-week training programme to get fighting fit.

Despite completing gym and boxing sessions up to six times a week in preparation for his bout Iveson was unable to emerge victorious from his bout at the Double Tree by Hilton, Chesterfield.

But he was pleased to see cancer charity Chancer Research UK claim a win thanks to the help of his work colleagues.

“I am so thankful to my friends, family and colleagues at Gordon Lamb Land Rover for supporting me in my fundraising,” said Iveson. “Although I wasn’t successful in beating my opponent, being able to make a contribution to the amazing work that Cancer Research UK is doing feels amazing and has been completely worthwhile.”

Iveson has been in his new role at Gordon Lamb Land Rover for two years and has worked for Vertu Motors plc, which operates the site, for nine years.

His colleagues at Chesterfield Land Rover gave him their full support and pledged to donate £250 towards his £500 target.

He said: “It’s not often these days that you meet someone that hasn’t been affected by cancer, and unfortunately, it left its mark on my own family when I lost my uncle.

“After hearing from a friend about the experience he had competing in a boxing match, it inspired me, with my uncle’s memory in mind, to sign up myself.”

You can help Thomas Iveson raise money for this great cause by donating directly via https://www.justgiving.com/fundraising/notorious-tiveson.