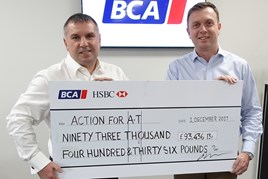 BCA has presented the Action for A-T charity with a cheque for £93,436 raised through the completion of the gruelling BCA Paris Challenge in September.

Raised through donations and sponsorships, the sum was handed over after forty-five riders from across the motor industry took the 250-mile cycle challenge to ride from BCA Blackbushe in Surrey to the Eiffel Tower in Paris, along with support crew and vehicles.

Craig Purvey, chief commercial officer at BCA was delighted to formally hand over the cheque to Sean Kelly, chief executive, Action for A-T who accepted it on behalf of the charity.

Purvey said: “We are delighted to hand over this cheque for £93,436 to Action for A-T following the BCA Blackbushe to Paris Cycle Challenge.

“Well done and thank you to everyone who participated - the riders and the support team, our suppliers and customers who sponsored our efforts and everyone for all their support and kind messages along the way.”

Action for A-T funds medical research to speed up the process of identifying a cure for Ataxia Telangiectasia, a rare, genetic degenerative disease of childhood.

The event proved to be a record fundraiser for Action for A-T.

Thrifty provided support vehicles for the duration of the event.  Sponsors riding on the BCA Paris Challenge included representatives from Cambria, LeasePlan, BMW and Alphabet.

Sean Kelly, chief executive, Action for A-T, said: “On behalf of Action for A-T and the families who look to us for hope, I would like to thank everyone involved in the BCA Blackbushe to Paris Cycle Challenge for helping us raise a record breaking amount for our charity.

“As a result, we will be able to fund an entire research study taking us one step closer to finding a cure or therapy for the devastating childhood condition known as A-T.”