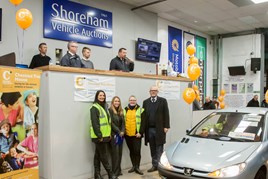 Yeomans Group, Frosts, Tates, Caffyns Volkswagen, Newton Honda, Dinnages, H.A. Fox and Harwoods all donated unwanted stock to the sale which was sold in aid of the charity.

In addition, for every charity vehicle auctioned Shoreham Vehicle Auctions added a further £200 to the sale price, with no additional auction fees.

The money raised in this year’s auctions has enabled total donations from the auction to reach £87,388 since Shoreham started supporting the hospice in 2011.

SVA sales manager, Catherine Stone, who has led this campaign since Shoreham began supporting The Chestnut Tree House in 2011, said: “We are extremely grateful and touched by the generosity of the motor trade in Sussex and surrounding areas.

“We couldn’t believe that for the second year running we managed to raise over £20,000 for such an amazing charity. We are speechless.”

Funds raised at the charity auction will go towards the care for 300 life-limited children, both at the hospice and in families’ own homes.