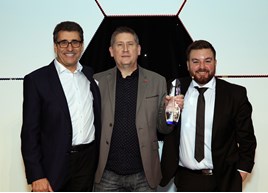 Hosted by TV presenter Alex Brooker, the evening was rounded off with entertainment from electric string quartet Escala.

Hendy Group’s chief executive Paul Hendy said: “The evening was a great opportunity to thank all of our employees who work behind the scenes but play a crucial role in the success of the group and reward some incredibly valuable members of staff.

“Last year, we serviced and repaired more than 235,000 vehicles at our dealerships in Hampshire, Sussex, Surrey, Kent, and Devon.”

Technicians, service and parts advisors from across the group were honoured for their work.

The key Hall of Fame award was presented to Mike Weatherston who joined in 1980 and has played an integral role in the continued success in the group.

Hendy said: “Mike has been with us for more than 37 years and has been such a valuable member of the team and instrumental in our success story.”