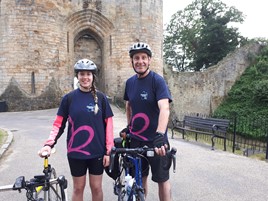 Jim and Rebecca Wood raised over a £1,000 for Alzheimer’s Society by cycling more than 500 miles from Tonbridge Castle, in Kent, to Edinburgh Castle in just five and a half days.

Jim took on the fundraising challenge in aid of the automotive retailer’s chosen charity as part of an ongoing mission to keep himself fit after a successful weight-shedding exercise three years ago.

Having completed the London marathon in 2017, he wanted to set himself a new challenge for 2018.

Jim said: “I knew what I was letting myself in for as I’ve driven up to Edinburgh many times before, so I could appreciate just how far away it was.

“Up until recently I had been focussed on running; my only real experience of cycling was from spinning classes in the gym.

“I had planned to do the ride by myself as I didn’t think anyone else would be mad enough to do it.

“But having just finished university my daughter Rebecca, who is a keen cyclist, volunteered to join me.”

The pair split their route between the two castles and split it into six stages.

The longest leg was 117 miles from Sunderland to Berwick-upon-Tweed and they averaged 91 miles a day.

On their journey they also stopped off at Inchcape UK’s Jaguar retail centre in York, where colleagues donated a further £55 and provided much-needed refreshments for the duo.

Jim, who celebrated his 58th birthday during the trip, added: “I chose Alzheimer’s Society because it was Inchcape’s chosen charity and I wanted to join colleagues in helping to raise funds and meet the company’s overall target of £50k in the first year of the charity partnership.

“So many people have been affected by dementia and were really keen to support us.

“It really opened my eyes as to the help this charity provides and gave us extra motivation to complete the challenge and raise as much money as possible.”