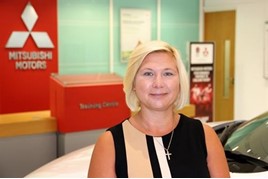 Baber Smith (pictured) will be responsible for the preparation and delivery of non-technical training, both in the classroom and via the OEM's e-learning platform and brings over 22 years’ experience in the motor trade.

Baber Smith said: “I have always believed that coaching and mentoring my staff is an essential part of any managerial role, and to see people grow and fulfil their potential is particularly rewarding.”

Starting as an apprentice technician, Baber Smith quickly moved through parts and service advisor roles and later up to the role of service manager.

In 2008 she completed a degree in Automotive Retail Management at Loughborough University, and went on to become divisional contact manager for Vertu Motors, general manager at Westlands Toyota and aftersales manager at TrustFord, alongside being a member of the IMI.

Mitsubishi Motors in the UK’s general manger network development, Emma Soble, said: “We are delighted that Annette has joined the team, and believe that her vast experience in the motor industry and particularly the dealer network will be a useful asset to the dealer staff she will be training and mentoring.”

The Training Academy for Mitsubishi Motors in the UK is based at the company HQ in Cirencester.

Between them, the team runs between 250 and 300 classroom courses a year complimented by a growing number of e-learning modules.

These courses and modules serve the 117 Mitsubishi dealers in the UK network, training all sales, aftersales and technical staff to the highest standard of quality.