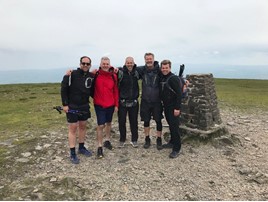 Marriott Motor Group’s directors have tackled the Yorkshire Three Peaks challenge as part of the business’s efforts to raise funds for East Anglia’s Children’s Hospice (EACH) in 2019.

The AM100’s 71st-placed car retail group is aiming to raise £16,800 for the charity as part of its Pay for a Day scheme which would fund the hospice services at The Treehouse in Ipswich and The Nook in Norfolk for a day, providing 24 hours of care for families in these areas.

In addition, this amount would also pay for 25 Hydrotherapy sessions at the facility.

Victoria Matthews, EACH Suffolk Corporate Fundraiser, said: “EACH would like to congratulate the directors of Marriott Motor Group for completing another challenge, in an amazing time, as part of their support for us this year.

“The amount they have raised will make a significant different to local life-threatened children, young people and their families in Suffolk and Norfolk.”

Marriott Motor Group’s Yorkshire Three Peaks success comes a year after the group of directors completed the National Three Peaks Challenge in 24 hours to raise funds for EACH.

In addition to last month’s Three Peaks challenge, Marriott Motor Group will be fundraising through various activities such as monthly dress down days and showroom events.