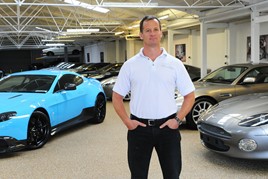 McGurk Perfomance Cars managing director John McGurk has been jailed for two months following allegations that he had driven a Ferrari F40 supercar dangerously on the A44 near Enstone.

McGurk was accused of having driven the Italian classic at up to 80mph in the rural roads near Blenheim Palace, before overtaking in a line of cars before a bend on the rural A-road, according to a report in the Oxford Mail.

A jury sitting at Oxford Crown Court later found him not guilty of dangerous driving but guilty of doing acts tending to pervert the course of public justice, however.

Prosecutors said that the 44-year-old, of Loxley Road, Stratford-upon-Avon, had lied to police by falsely claiming that somebody else had been behind the wheel at the time of the incident.

The Oxford Mail reported that McGurk had, between September 4 and October 18, 2017, pursued a course of conduct which amounted to perverting the course of public justice by nominating somebody else as the driver.

He did this to frustrate the police investigation into the alleged 'dangerous driving', prosecutors said.

McGurk was sentenced at Oxford Crown Court on July 11.

In October last year AM reported on McGurk’s growing business, McGurk Performance Cars, which aims to deliver franchised levels of service from its facility, which sits at the centre of a triangle of three Aston Martin dealerships and a stone’s throw from the manufacturer’s HQ in Gaydon, Warwickshire.

McGurk said that he joined the automotive industry at a young age having dropped out of school at the age of 16 and worked his way up to a role working for Sytner’s Ferrari dealership in Loughborough as a sales manager by the age of 25.

During time spent employed by TWR he also became involved with the Jaguar XJ220 produced in conjunction with the motor racing and engineering firm.

“I was a typical car-mad teenager, buying cars and pulling them apart in my dad’s garage and rebuilding them. I always wanted to be in the car business,” he said.

McGurk set himself up as a trader buying and selling about 50 cars a month from 2002.

When his current premises became available in 2006, he seized the opportunity to establish a retail operation.

In December 2017 McGurk Performance Cars opened its 8,000 sq ft showroom on the same site, in a former hangar where parachutes were made during World War II.