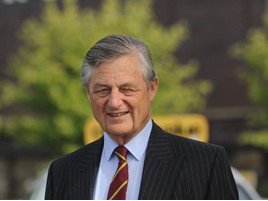 Tributes have been paid to “true gent” Sir Michael Marshall following the death of the Marshall Group honorary life president at the age of 87.

A flag at the Cambridge UK headquarters of the Marshall Group was lowered to half-mast after news of his death - while on a family holiday in Spain - reached the business yesterday (July 28).

Marshall Motor Holdings chief executive, Daksh Gupta, described Sir Michael as a “true gent” as he paid tribute to him at the weekend.

Gupta added: “Sir Michael was very fond of the Motor Group having personally ran it for over 40 years, his personal values around people and customer service are deeply embedded in our business today. I know he was incredibly proud of the motor business.

“On a personal level, I served on Sir Michaels Board for eight years prior to our IPO in April 2015 and it was a privilege to work with him, words cannot describe my affection for him.

“Our thoughts are with his wife Sibyl and the rest of the family today.”

Cambridge’s Business Weekly website said that “it was Sir Michael’s foresight and steady hand on the tiller that turned the company into a business of our times and a force for the future”.

While its aerospace and defence group has become a world leader, the Motor Group has been spun off, floated on the London Stock Exchange and has since risen to become the AM100 seventh-placed retail group by turnover in 2019, with revenues of £2.25 billion.

Sir Michael was educated at Eton College and read History at Jesus College, Cambridge, where he also gained his rowing blue and rowed for Great Britain in the European Championships in 1955, later serving as chairman of the Cambridge '99 Rowing Club.

Prior to attending university Sir Michael completed his National Service as a pilot in the Royal Air Force between 1950 and 1952.

In 1955 he joined the family business and was appointed managing director of Marshall (Cambridge) Limited in 1963 before being named as deputy chairman of the Marshall Group of Companies in 1965.

He became group chairman and chief executive in 1989.

The role of chief executive was passed to his son, Robert, and the chairmanship to Alex Dorian, in 2011.

Sir Michael was High Sheriff of Cambridgeshire in 1988 and served as a Deputy Lieutenant of the County from 1989, including as Vice Lord-Lieutenant from 1992 to 2006.

In 1999 he was made a CBE in Queen’s Birthday Honours in 1999, before being honoured with a knighthood in the 2010 New Year's Honours for his services to business, charity and the community of Cambridgshire.

He had been involved with the Cambridge Appeal for the British Olympic Association, the Prince's Trust fundraising committee and The Ely Cathedral Restoration Appeal.

Sir Michael had also served as president of Addenbrooke’s Charitable Trust, was chairman of the Court of Benefactors of the East Anglian Air Ambulance, the Honorary Air Commodore of Number 2623 (East Anglian) Squadron Royal Auxilliary Air Force Regiment and was a member of the Council of The Prince’s Charities.

Sir Michael remained a supporter of the annual charitable Chariots of Fire relay race, which was named after the 1981 Oscar-winning film about the British team at the 1924 Olympics in Paris, for which has father had tried out.

A citation written for his honorary doctorate from Anglia Ruskin University, where he was also made an honorary visiting professor in 2009 and honorary doctor of the university in 2001, described him as a “dynamic force for good in the business and social life of this city of Cambridge and the county of Cambridgeshire.”

A statement issued by Marshall of Cambridge said that, while it was too soon to confirm any arrangements, it was anticipated that there would be a small family funeral for Sir Michael, followed by a memorial service later in the year.