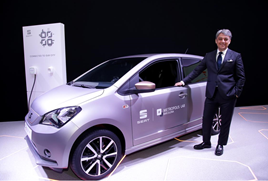 Luca de Meo has stepped down from his position as president of Seat with immediate effect, strengthening rumours that he will be taking over as Renault’s chief executive.

A statement issued by Seat confirmed today (January 8) that de Meo will remain a member of the Volkswagen Group “until further notice”.

However, the Italian executive is reportedly the frontrunner in Renault’s search for a new boss, after it ousted Thierry Bollore last month.

According to the Financial Times, de Meo is the only remaining external candidate for the role, but must first agree an exit package with VW as well as joining details at Renault.

Renault had not responded to the claims.

De Meo started his automotive career at Renault more than 25 years ago. He has since worked for Toyota and Fiat, before joining VW Group in 2009.

During his four-year tenure as Seat president, de Meo oversaw a dramatic turnaround of the Spanish firm - launching its SUV range and moving Cupra to a standalone brand.

Sales have soared, with Seat UK increasing its annual registrations by 9.4% to 69,000 cars in 2019, according to data published by the Society of Motor Manufacturers and Traders (SMMT) this week..

The next step in the brand’s evolution is the launch of its fully-electric El Born model, which is expected later this year.

Seat’s vice-president for Finance, Carsten Isensee will lead the business until further notice.