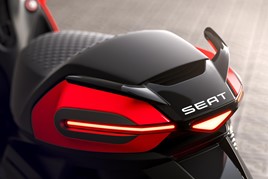 Seat retailers could soon be called upon to sell electric scooters as the Spanish car brand prepares to unveil its eScooter concept as part of the Volkswagen Group’s micromobility strategy.

The new compact mobility solution is said to be Seat’s take on an electric motorcycle equivalent to a 125cc scooter and is set to be wheeled-out at the Barcelona Smart City Expo World Congress on November 19.

A statement issued by the brand yesterday (November 6) stated that the new eScooter concept formed “part of the company’s urban mobility strategy, which focuses on offering sustainable solutions for cities”.

This strategy also includes the Seat Minimó compact EV concept car as well as the Seat eXS Kickscooter powered by Segway, which was presented at the 2018 Smart City Expo.

“Today we are taking a further step in our urban micromobility strategy by confirming the launch of the first eScooter in the history of the brand.”

Seat has developed its eScooter concept through a collaboration with Barcelona-based electric motorcycle maker Silence, and the brand said in its statement that the new product “will be sold to both private customers and sharing fleets”.

News of Seat’s move into “mictomobility” comes just less than a week after it appointed Lucas Casasnovas as its new head of urban mobility, with responsibility for all projects related to urban mobility.

Earlier this year AM reported that Government-backed research group Cenex had found that promotion of electric scooters or mopeds could significantly lower energy use and emissions.

Shortly after the UK Government published its clean air strategy to reduce emissions and improve public health, the Cenex report has found that electric scooters use 72–91% less energy and reduce greenhouse gas emissions by 70–90% compared to a 250cc scooter of similar specifications.

Cenex’s head of transport Steve Carroll said: “Scooters and other light vehicles have a key role to play in creating less congested, more efficient and cleaner cities in the future.”