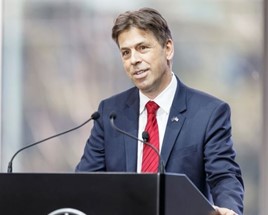 Exler officially took office at the AM100 car retail group yesterday (April 20) and will serve on its Nomination Committee, Remuneration Committee and Audit Committee.

Commenting on his appointment, Berman said: “I welcome and look forward to working with Dietmar on the Pendragon Board.

“I am confident that his considerable experience from his professional and business life will provide a positive contribution as we further strengthen our Board in challenging and uncertain times.”

He currently serves as Chief Operating Officer of AMB Sports & Entertainment and previously held the position of president and chief executive of Mercedes-Benz USA and head of region, NAFTA Mercedes-Benz.

Exler succeeded Steve Cannon to head the German brand’s US operations in January 2016.

In each of his three years as chief executive, Mercedes-Benz was the best-selling luxury brand in the US.

Pendragon has faced challenges in recent times, however, and revealed a £117.4 million loss after tax in 2019 within an annual results statement published last month which revealed the full impact of “significant H1 losses”.

‘Key appointments' made at JudgeService

‘Key appointments' made at JudgeService