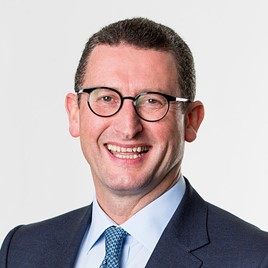 Inchcape has appointed former Fujitsu director Duncan Tait as its new Group CEO after the departure of Stefan Bomhard prompted “strong interest and a group of high-quality candidates”.

Tait will join the board as group chief executive (designate) from June 1, according to a statement issued by the AM100 PLC, and will assume his full role on July 1 following a period of handover from predecessor Bomhard.

Tait said: "I am very pleased to be joining Inchcape and leading the business at such a dynamic time for the automotive sector.

“I look forward to working with a very talented management team as we navigate through the complexities of COVID-19, on the next phase of the company's growth plan, at the same time maximising the opportunities that will come from new and developing trends in the industry."

Inchcape began the search for a new chief executive when Bomhard resigned his post with the car retail and import business to take up a position as the chief executive of cigarette producer, Imperial Brands.

Inchcape’s replacement was most recently on the board of directors at $10 billion turnover Tokyo-listed tech company Fujitsu Ltd, with responsibility for EMEIA & Americas.

He also currently serves as a non-executive director on the boards of Agilisys Ltd and Business in the Community and previously held executive and senior management positions at Unisys, Hewlett Packard and Compaq in a technology services-focused career of over 30 years.

Since leaving Fujitsu, Tait has also joined ScaleUp Group, advising and supporting the growth potential of entrepreneurial businesses, according to Inchcape’s statement, which was issued via the London Stock Exchange.

Commenting on Tait’s appointment to Inchcape, group chairman, Nigel Stein, said: “We are delighted to welcome Duncan to Inchcape.

“He is an exceptional chief executive and I am confident that Duncan's style and approach will be a good fit with Inchcape's culture and values, and his substantial technology-focused background will help the acceleration of our Ignite strategy.

“Duncan has worked with numerous industries and governments around the world and also brings with him experience of the automotive industry having been Fujitsu's executive sponsor for Ford Motor Company.

“He was accountable for programmes with VW, Daimler and BMW, including work on autonomous vehicle and mobility projects. His almost ten-year experience of Japanese business and culture will also be valuable to our business.

“I would like to repeat my thanks to Stefan Bomhard for his contribution to Inchcape since his appointment in 2015 and to wish him well in his future endeavours."

Bomhard said: “I would like to thank Nigel, the board and my colleagues on the group executive team for their support over the last five years in the transformation of Inchcape towards a distribution weighted business model behind the Ignite strategy.

“This is fundamentally a very strong business with, I believe, a great future of growth ahead, and I wish everyone at Inchcape the very best."

Back in February Inchcape reported a 1.3% increase in turnover and a 256% increase in its profit before tax in its full-year financial results for 2019.

Revenues at the global operation rose to £9.38 billion as PBT of £402 million during the period reflected the gains made by the car retail and vehicle distribution business’s recent disposals and 2018 impairment charges.

Inchcape’s results statement said that its actions in the UK market during 2019 had been centred on “optimising our portfolio of Retail sites where we were less able to leverage costs efficiently through a local scale presence”.

The result was its disposal of seven sites to Group 1 Automotive and Motorline for a combined sum of £21 million in August last year and Inchcape Fleet Solutions (IFS) to its OEM partner, Toyota.

In January, following the end of the reported period, Citygate Automotive also confirmed its acquisition of Inchcape Retail’s Volkswagen dealerships in West London and Twickenham – six weeks after AM reported on the impending deal.