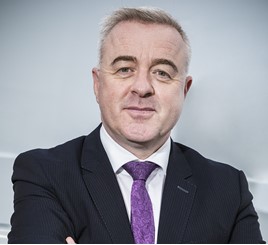 Bridge, who heads up the Board of Management for Mercedes-Benz Vans UK Ltd and has been managing director since 2014, will officially leave his current post on January 31.

Its acquisition of locations from Roanza did not include the former group’s sites in Doncaster, East Manchester and one of the two sites previously operated in Liverpool, which ceased to trade.

A statement issued by Mercedes-Benz Vans UK today (November 16) said: “Steve is passionate about supporting those who buy and run Mercedes-Benz vehicles, having previously spent more than 10 years while working at GE Capital and Lex Transfleet as a customer of the brand.

“This experience has ensured that Steve’s focus is firmly on the customer, which is why he is staying ‘within the family’, and will be going to head up the newest Mercedes-Benz commercial vehicle dealer as managing director of eStar Truck & Van, based in the North West and North Wales.”

Three and a half years later, he took on the role of sales and marketing director, effectively responsible for the Mercedes-Benz van business unit in the UK.

The LCV brand said: “Steve has overseen huge growth in that time, taking Mercedes-Benz Vans’ sales volume from 25,000 vehicles a year, to 44,000 units last year, as well as introducing new models to the market, including the electric vehicle range, and piloting many international projects for Mercedes-Benz HQ in Germany.”

Mercedes-Benz Vans UK has said it will announce a new managing director “in due course”.