G3 strengthens board and senior management team with new appointments 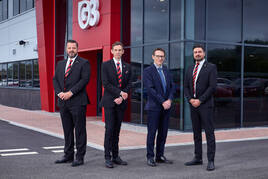 G3 Vehicle Auctions have appointed a new board of directors, alongside a group general manager, to oversee its next phase of growth plans following the opening of its new purpose-built facility, G3 sold a record number of vehicles.

Rob Argyle, who has more than 14 years’ experience in multi-site FMCG operations, will join the team as chief financial officer (CFO). He has spent the last seven years serving as finance director.

Also joining the newly formed board are two internal promotions. Nick Thompson has been promoted to sales director following an initial 12-months at G3 as divisional director, where he assisted with the successful launch of the new 14-acre G3 Castleford centre, G3 said.

Gareth Jones has been appointed to the board as digital director following three years as the marketing manager at G3, and more than 14 years in senior marketing and digital-focused positions.

Jones will work closely with the IT and sales departments to co-ordinate the roll-out and development of G3’s new SaaS products and solutions designed to improve the customer journey, whilst generating further revenue capitalisation opportunities, it said.

Brett Henderson has been appointed as group general manager to introduce and enhance processes across G3’s two physical auction centres and 35 smart hubs.

Matt Dale, G3 co-owner, said: “We have invested significantly over the last 18 months, starting with the development and launch of our new auction centre in Castleford, and now continuing the theme with these high-profile additions to our senior management team.

"The creation of a new board will enable my co-director, Amanda Holtby and myself to assume a more strategic position to help drive the growth plans over the next three years.

“I am very confident the new management structure we now have in place will inspire us to deliver on these objectives."

“With a number of key vendor additions to announce in the next few weeks alongside significant investments in new auction solutions, G3 will continue to lead from the front in our industry.”