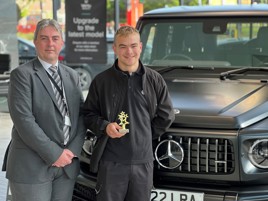 A Vertu Motors apprentice has won a week of work experience at the AMG Petronas Formula One team headquarters, in Brackley.

Max Errington, an apprentice technician at Vertu Slough Mercedes-Benz, was awarded the opportunity after being selected for the Mercedes-Benz Tony Pritchard Recognition Award.

He will join the AMG Petronas team in the week leading up to the British Grand Prix at Silverstone.

Errington was nominated by service manager Scott Marshall in the Apprentice of the Year Awards, as an apprentice who has “demonstrated Mercedes-Benz values consistently”. He has always submitted work on time, received brilliant feedback from customers and is an active team player, according to Marshall.

Raj Virdee, head of business at Vertu Slough Mercedes-Benz, said: “Apprentices like Max are the future of our business, and I am delighted that his commitment and professionalism have been recognised with this award.

“I am certain he will have an amazing time working alongside the Formula One technicians, as they prepare for the British Grand Prix.”

The Mercedes-Benz Apprenticeship Academy develops young people for the Retailer network, in order to support succession planning and Mercedes-Benz growth aspirations. The brand-focused programme has a 96% achievement rate, with 70% of graduates still within the dealer network after 10 years.

At the start of the year, Vertu Motors launched a nationwide apprenticeship programme with 120 customer service vacancies available.

The new roles were in addition to the group’s existing modern apprentice technician vacancies.

The AM100 car retail group said the new customer service apprenticeship programme is actively seeking more candidates with retail or comparable experience, in addition to those fresh out of higher or further education.

In a satisfaction survey, it was revealed that more than 90% of its staff members say they enjoy their job.

AM News Show: Making automotive retail a ‘home from home’ for apprentices

AM News Show: Making automotive retail a ‘home from home’ for apprentices