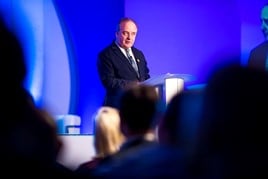 The former chairman and chief executive of TrustFord and director of Pendragon’s Evan Halshaw Ford Group, who was inducted into the AM Hall of Fame at May’s AM Awards, died at the age of 67 last Thursday – just weeks after undergoing heart surgery.

Former Ford of Britain managing director Andy Barratt and Inchcape chief executive James Brearley were among the first to pay tribute to a man described as a ‘gentleman of the industry'.

Today former colleague and current Pendragon chief operating officer Martin Casha was among those keen to share their memories of Foulds.

Casha said: “Stuart’s passing leaves an unfillable hole in our industry and in our lives. I have been fortunate to consider him more than a work colleague. He was very much a friend. I had huge respect for Stuart, not only professionally but also personally and I can only hope that our friendship throughout the years bought him the same joy and memories it has provided to me.

“Stuart’s passing is a sad day for our industry, but also for the countless people who were so positively impacted by his passion, knowledge and love for life. I will miss Stuart’s professional counsel and personal friendship which has been so welcome and appreciated for so long.”

Picking up on a trait also highlighted by Brearley, Evans Halshaw’s Ford National franchise director Adam Fletcher said that Foulds’ ability to identify and develop new talent was “second-to-none”, adding that “our industry is now represented far and wide with the talent Stuart personally gave a start to”.

Fletcher added: “Throughout my career I have looked back on the advice and guidance Stuart imparted on me and at difficult times frequently ask myself ‘WWSD – What would Stuart do?’ I feel honoured to have known Stuart as a personal friend and colleague for as long as I have, and owe a large part of my career development to him personally.

“He will long be remembered not only by the Ford community, but our industry as a whole.”

Pendragon Group motor division finance director Richard Thomas, who had known Foulds for over 20 years, described him as a “consummate professional, inspirational leader and a personal mentor”.

He added: “Stuart was, and remains, a huge influence on me personally and professionally. His unique sense of humour and outgoing personality made him a pleasure to be around and the behaviours he was so influential in shaping within me, are those that I am proud to display today. He will be missed as a colleague, leader, mentor and industry stalwart, but much more than that, I shall miss him as a friend.”