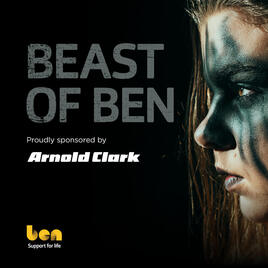 Arnold Clark has shown its support for the Beast of Ben fundraising challenge by agreeing a sponsorship package for the automotive charity's gruelling new event.

As well as entering a team, the car dealership group has partnered with Ben for the event which will see teams from across the industry take on a points-based adventure challenge and test their automotive rivals’ skills to the limit.

While a spokesperson for the group said that it did not want to detract other car retail operations from supporting the cause, the event will be referred to as ‘Beast of Ben, proudly sponsored by Arnold Clark’ as part of its sponsorship.

Lynne McBurney, group head of people at Arnold Clark, said: “Ben is there for everyone within the automotive industry when they are going through a crisis and need support.

“That’s why this is an outstanding opportunity to give something back and have the experience of a lifetime while doing so.

“A great number of Arnold Clark employees have benefitted from the support of Ben throughout the years, and we’re delighted to partner with them for the event in the knowledge that the funds raised will make a real difference in the lives of those who need support.”

Beast of Ben place between July 6 and July 8 at a location just outside Llanberis, North Wales, and involves several team challenges, including abseiling, water crossing, and problem solving, with the winning team taking home a trophy.

Bonus points can be earned along the way with additional trials and fundraising milestones.

Each team needs to have four members, and the entrance fee is £250 per person with an additional team fundraising goal of £4,000 to be raised by the end of July 2022.

During the event, teams will camp out and be provided with meals and safety equipment, with supervisions and organisation provided by Ben’s approved activity provider, Aspire Adventure.

Sarah Hughes, head of automotive industry partnerships for Ben, said: “We’re delighted to be working with our friends at Arnold Clark to bring this incredible adventure challenge to our industry, and we’re very grateful for their continued support.

“More than 30 teams have already signed up to take on Beast of Ben and we’re looking forward to crowning the first champions this summer. Arnold Clark’s own team will have some tough competition.”

Arnold Clark has been shortlisted as a finalist for the Community Hero Award at the 2022 AM Awards.

Book your place at the ceremony on May 12 at Park Plaza Westminster Bridge Hotel, London.

Find out more about Beast of Ben.