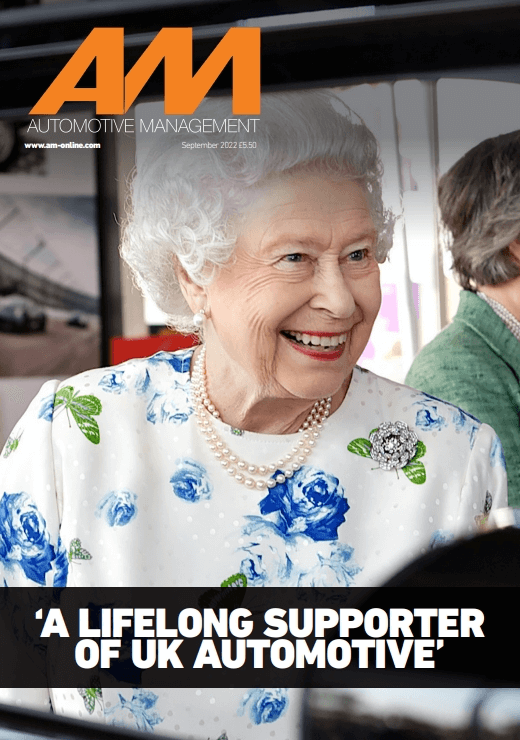 Tributes to Queen Elizabeth II for her lifelong support of, and interest in, the UK's automotive sector feature in the September 2022 issue of AM magazine, available to read here free in digital format.

Shortly before The Queen's death the appointment of Prime Minister Liz Truss prompted dealers to tell AM of their hopes for business support from the new Cabinet, such as lower VAT.

An exclusive survey in AM magazine shows a trend in increased wage bills to support staff who are feeling the squeeze, although some businesses are concerned they may not have enough in their "war-chest" to cope with a harsh winter of rising costs.

Luke Broad, brand director at Dacia UK, reveals his plan to double the value brand's new car sales by 2025 and discusses its lead part in digital developments for Renault Group.

Our Spotlight section focuses on aftersales in this issue, with retailers and industry experts haring views on how workshops must help customers to keep their cars maintained through a period when they are concerned about their own rising costs of living

And in our Showroom section, we report on the launch of the Nissan Ariya electric car and Nissan GB managing director Andrew Humberstone's hopes for it to reposition the Nissan brand, plus our long term test of the Cupra Born continues to stir up emotions.

When the news broke of the death of HM Queen Elizabeth II the team here at AM, alongside many people across the country, felt a real sense of sadness and loss.

As with the majority of AM readers, I have only known life with The Queen, and the end of her 70-year reign is truly the end of an era.

I grew up in West Norfolk, a region with a close connection through her residence at Sandringham, where the Royal Family spent their Christmases. As such, local TV footage and newspaper photos showing her going about Sandringham in her Land Rovers helped to make her iconic and inspirational in my eyes.

In time, we will of course move forward under King Charles III, and the pressing priorities for businesses will return to the front of our minds.

We have Liz Truss MP as the new prime minister of the UK and I hope she's a good listener. The pressures on businesses - and consumers - are unsustainable. Many face working as hard as possible yet still being outpaced by outlandish energy costs.

Some business leaders may say they mustn't waste time trying to 'control the uncontrollables'; well it is those in the UK Government who must come up with policies and mechanisms which at least cushion the impact.